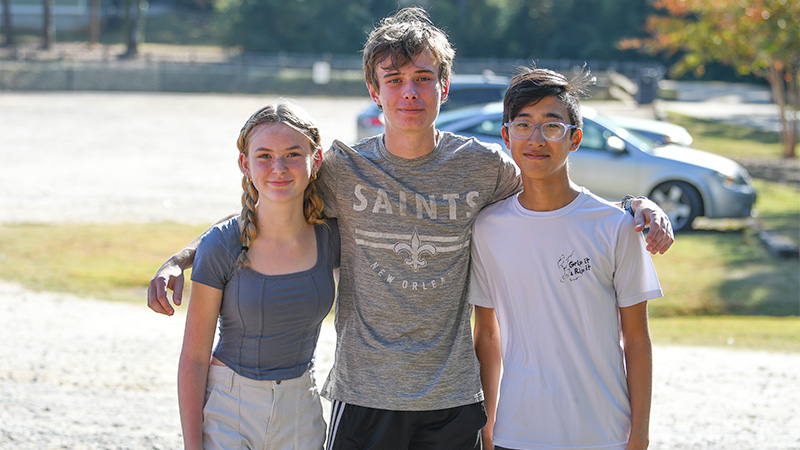 The LaGrange High School cross country team has begun a new era in 2022 under the stewardship of first year coach Blase Leverett.

“We are 40 seconds faster than the team last year,” Leverett said. “It’s factual to say that we are the most improved team in the region. We have had multiple top-10 finishes from individual runners. We have had two-mile records broken on the girls and the boys squad. I was so happy and proud to see them stick with it, and the progress they’ve made from first practice until now.”

The established guard, including top boys runner Bo Beall and elite girls runner Raleigh Thompson — who won region 4-AAAA runner of the year — set the tone, but it is the first-year runners that have taken the Grangers to the next level. Their ability to buy into something new has the girls positioned to take another major step forward next season and the boys making the state meet in 2022.

“I want to get my personal record at state,” said Ben Lee, a sophomore and first year member of the team. “I think this is going to be the race to do it.”

It will be a challenge as the boys head up to a difficult course in Carrollton next week for the state meet.

Opinions and perspectives on cross country are changing at LaGrange High in large part due to a grassroots effort by Leverett, who wants cross country to no longer be seen as conditioning for other sports. He already has one convert in Calder Thurman.

“My first thought was that I would use cross country to build stamina for baseball,” Thurman said. “I love running so much that I’ve decided to quit baseball and run track in the spring. I want to be a long distance guy.”

This is in stark contrast to the first cross country practice in which Thurman could not even run two miles. He was not the only runner that struggled at the start.

“At my first practice, I was not able to get through the workout,” freshman Callie Morris said.

Morris made the transition from middle school to high school over the summer and this was her first season competing with girls that are 17 and 18 years old, which presented even more challenges.

“High school is a lot more difficult because in middle school I was the oldest,” Morris said. “Now, everybody is older and so much faster than you.”

It is a learning experience and a chance for growth. With so many inexperienced runners on the team, if Leverett can retain them year over year he can build them up into high level cross country runners.

“Now, I’m able to run three miles pretty easily. It makes it feel like the work really paid off.”

“I’ve increased my stamina and gotten a lot faster,” Lee said. “It’s got me in better shape.”

All three plan to keep on running cross country over the next few years. All of them are underclassmen and are likely to be building blocks for the boys and girls programs going forward.

“It says a lot about the curiosity of kids that kids want to test the waters of long distance running,” Leverett said. “I want the kids to feel good and not like their time is being wasted. I want them to have fun and come here and build bonds and stay out of trouble.”

Leverett has breathed new life into a program that had been a bit dormant. He brings an energy to cross country that his team is able to feed off of.

“I really enjoy working with coach,” Thurman said. “He’s a good coach and a great person. He’s really pushed us to be the best people we can be.”

“At the beginning, I rushed and used up too much energy early and had to stop a few times,” Lee said. “As I increase my time running, my stamina has gotten better, and I don’t rush anymore.”

Now, the trick is to raise the bar even higher after it was reset in 2022, but first Leverett wants to have a good showing for the boys team at state.

“Our goal is to beat the bottom eight,” Leverett said. “We have a lot of teams that we are going up against that have come down a classification and have much bigger talent pools than us.”