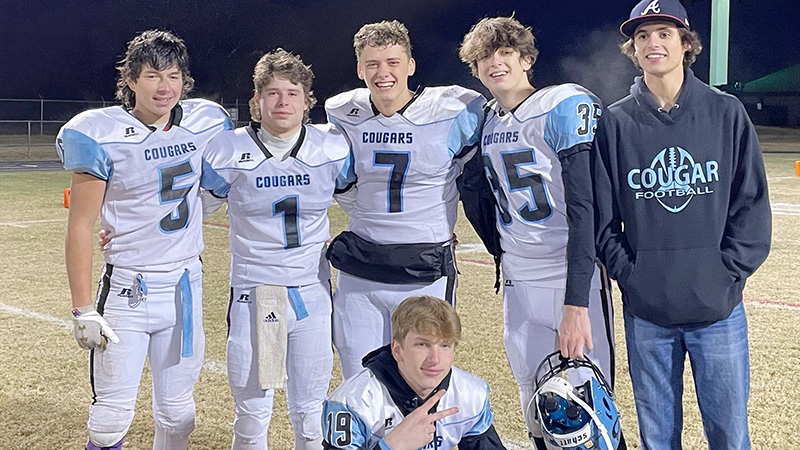 Lafayette Christian saw its season come to an end on Friday in the GAPPS state semifinals when the Cougars lost 54-12 to Sherwood.

“They are a really good football team,” Cougar coach Jarred Pike said. “Our goal was to stop the run after they ran it all over us last time. We ended up stopping the run early, and they went into spread and started throwing it around.”

It was not the Cougars’ night. Sherwood jumped out to an early 13-0 lead before Ephraim Snyder gave the Cougars life on a short rushing touchdown after a long pass from Andrew Hough to Braden Firth set it all up. The Cougars cut the lead to just seven points with 2:34 left in the first quarter.

“They got a lot of weapons, but the score doesn’t tell the whole story of the game,” Pike said.

Unfortunately, Sherwood would answer on what could have been the deciding play. On third-and-11, the Eagles hit a long touchdown pass to take a 20-6 lead and snatch all the momentum the Cougars had built.

“We came in there and played with a chip on our shoulder and did some good things in the first half,” Pike said. “We ran the ball well and threw it well. We would just get in third and long situations on defense, and they would sneak a pass behind us.”

After a bit of a stalemate in the third quarter the Eagles offense sprung to life and outscored the Cougars 20-0 in the fourth quarter.

“The third quarter got a little chippy,” Pike said. “There were a bunch of personal fouls, and it slowed the game down.”

It was not the storybook ending the Cougar faithful were hoping for, but it was a successful season for the Cougars. After missing the playoffs last season, Pike guided the Cougars into the playoffs and earned his first playoff win as the head coach in the process.

“Considering we were in a new region, and we are the smallest team size-wise, this season was a success,” Pike said. “We lost our leading receiver and rusher from last year, Alex Tusing. Another one of our best players has been ineligible all season, and Braden (Firth) has been battling a knee injury all year and doesn’t play half the season. Taking all those things into account I’m proud of our guys for making it all the way here.”

The next step for the Cougars: getting the program to the level of Sherwood and Unity so that the Cougars can be the ones heading to a state championship game.

“We have to hit the weight room in the offseason,” Pike said. “We have to get bigger, and we keep telling them ‘you don’t get big for no reason, you have to work out and work hard.’”

The Cougars will be losing a talented and deep senior class. Baylor Wise, Andrew Hough, Braden Firth, Cal Evert, Tyler Dollar and Alex Tusing have all played their final games as a Cougar.

“They are a good group of guys,” Pike said. “All those seniors got their state rings as sophomores. They bring a lot of talent, leadership and experience. They gave it all they had.”