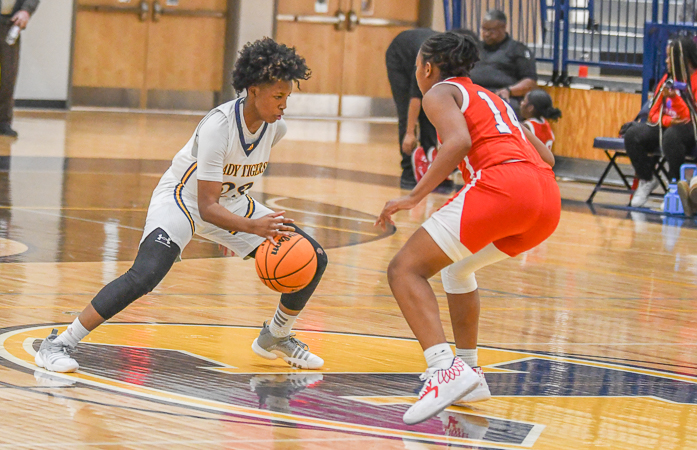 The Troup girls basketball team got back on the court Thursday night and took care of business in their season opener against Greenville. The Tigers walked away with a comfortable 55-28 win.

“I loved our energy, effort and hustle tonight,” Troup coach Carla Thornton said. “As long as they keep doing that, I can live with mistakes.”

It is a young Tiger team this season and will take some time to gel.

“It can take a while, honestly,” Thornton said. “Most of these girls were freshmen last year. They were on the end of the bench and now they are starters.”

The first half was competitive before the Tigers dominated the second half, outsourcing Greenville 29-13 in the second half and 18-2 in the third quarter alone.

“We made a few halftime adjustments and the girls went out and executed,” Thornton said.

The defense was dominant, but the offense shined at times too. Alexcia Murphy picked up right where she left off last season and scored a game high 19 points. She scored 11 of her points in the third quarter to put the game out of reach.

“She’s so important,” Thornton said. “She has that experience of playing on a Final Four team. She knows what it takes to get to that level. She’s trying to instill that mindset into some of the young girls we have now.”

It was not only Murphy that impressed on the night.

“Nasha Daniels stepped up big for us tonight,” Thornton said. “Everybody knows what Alexcia can do, but it was good to see Nasha step up offensively and defensively.

Daniels had nine points, while Raygen Godfrey was second on the team in scoring with 11 points. Jaz Williams and Autumn Bulloch chipped in with seven points apiece and Jynee Dozier had two points to round out the scoring of the Tigers.

Williams had the only Tiger 3-pointer as they did almost all their damage from inside the arc and from the free throw line.

The Tigers led the majority of the game and took a five point lead into the second quarter and a 11 point lead in the halftime break. The win was secured long before the final bell as the Tigers start the season 1-0.

“I basically have a whole new team,” Thornton said. “Any win we can get is important. It will boost the girls morale.”

Troup will head down to Valley, Alabama for its second game of the season on Saturday.