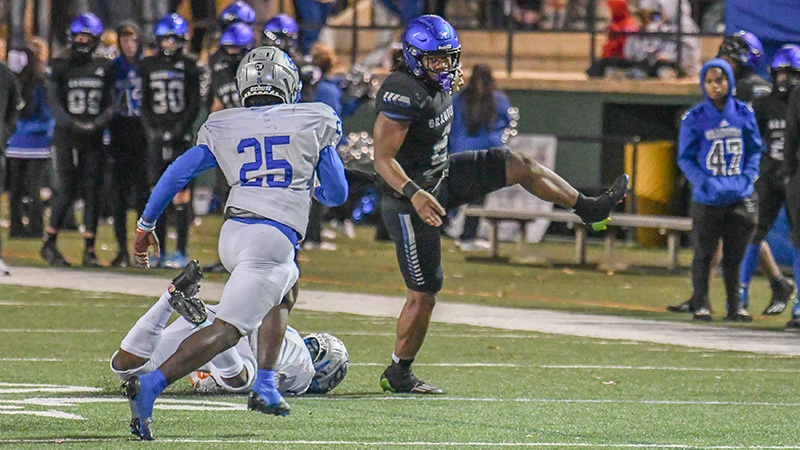 Jaylan Brown is coming off a sensational senior campaign on the gridiron for LaGrange High. For the first time in his high school career, he is jumping straight onto the basketball court for the Grangers.

“This is my first year playing basketball here,” Brown said. “My friends on the team kept telling me to come out, and it’s my senior year, so I thought why not.”

On the transition from football to basketball:

“It’s a whole new feeling. I’m going to have to get used to it. It is no longer about talking, now I gotta do it.”

As a runner, Brown is an absolute bruiser, willing to lay his shoulder into anybody he meets on the football field. He finished the season with 352 yards rushing and a team-leading 12 rushing touchdowns. What made Brown such a potent threat for the Grangers was his development as a passer coming into the season.

“I’m in the best shape of my life,” Brown said. “I’m taller now so I can see over the line better and move around the pocket better. Back then I was just straight downhill running. I can extend plays now and it’s made it a lot easier for me.”

Brown finished his senior season throwing for 1,621 yards and 15 touchdowns to just two interceptions. One of the reasons he was able to accumulate these stats across 10 games was the production of wide receivers Magic Johnson and Jaylon Jordan. The three seniors grew together and share a bond that goes beyond Friday night lights.

“Me and Magic used to play against each other in rec (football) and we would go at it any time we played against each other,” Brown said with a laugh. “We’re brothers and it’s the same thing with JJ. I know how they run and how they play.”

After going winless against Troup to start his Grangers career, the senior was hungry for a taste of Tiger before he departed high school, he got it when LaGrange topped Troup in the final game of the 2022 regular season to book a spot in the playoffs.

“That will probably be my favorite high school football memory,” Brown said. “I went here all four years, and I thought I would never be able to say I beat Troup. I can say that now.”

It was not the only back to the wall performance the team had. Two weeks prior the Grangers had to beat Trinity Christian to keep their playoff hopes alive. As one of the leaders of the team, Brown helped spark his team to a pivotal victory.

“We just locked in and said ‘if we beat Trinity Christian, we are going to the playoffs,’” Brown said.

It was a bittersweet football finale at LaGrange for Brown as the Grangers fell to Burke County in the first round of the playoffs in a narrow 23-20 defeat. While he will not suit up for the Grangers football team anymore, the journey was worth the destination.

“It was a dream come true,” Brown said. “When you first start, you think it will never end. Once it ended, I wouldn’t want it to happen any other way. I’m upset with how the season ended, but I wouldn’t want to end it with any other brothers, teammates, players, coaches, everyone on our staff.”