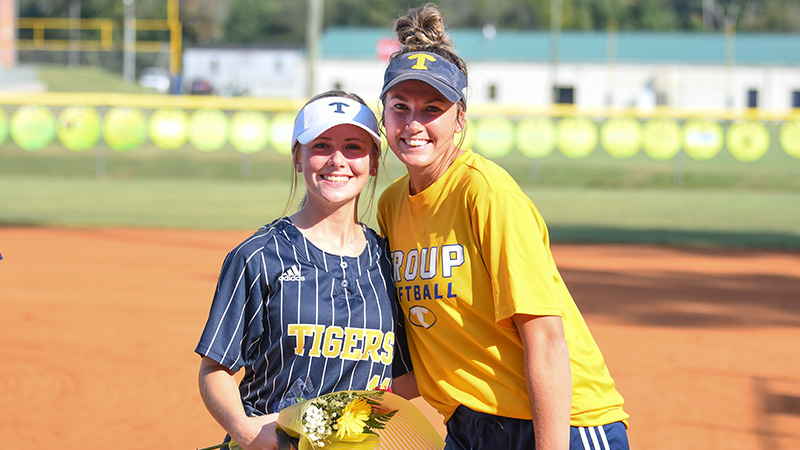 Haley Cotton enjoyed a breakout campaign on the diamond for the Troup Tigers. The senior went from being an average hitter to one of the Tigers premium bats.

“I was batting .200 every other year, but I hit almost .400 this year,” Cotton said. “I’m really proud of myself for stepping up and being a team player and helping us win games.”

Cotton finished the season hitting .368 and her on base percentage of .500 led the team among players that appeared in at least six of the 28 games the Tigers played in 2022. She led the team in walks (12) and runs scored (20) while also finishing fourth on the team in hits (21).

“I practiced even harder to try and keep the momentum up,” Cotton said. “I wanted to do my best for my girls out there, which made me want to work harder. Every day I was out in the yard throwing the ball and working on hitting the ball. I practiced as much as I could.”

Despite her large uptick in offensive production in 2022, she made her bread by being a stout defensive player.

While she was not quite as clean as her junior season, it was still another quality defensive showing during her senior year.

“I was defensive player of the year last year for our team,” Cotton said. “I was really proud of myself for doing that with only two errors. I’ve been pretty good on defense this year too and that’s my strength.”

While she was not quite as clean as her junior season, it was still another quality defensive showing during her senior year. She had second base on lockdown. Sne offered a steady hand in the infield for the Tiger defense.

“(Coach Ryan) Simpson has always encouraged me and been a thorn in my side,” Cotton said laughing. “She always pushed me to do better. She knows what she’s doing out there.”

Under Simpson, Cotton was able to be a key figure on three straight runs to the sweet 16 in the AAAA playoffs including in 2022.

“It was fun and a good team bonding experience with us having to travel so far,” Cotton said.
“All those memories on the bus and in the hotel rooms, and all the other stuff will stick with me.”

While she is mainly known for her prowess on the diamond, she was also a member of the flag football team. She was the starting quarterback for the Tigers during her junior and senior seasons.

“I love flag football,” Cotton said. “I’ve always loved to play backyard football and football on Thanksgiving. It’s been a passion of mine.”

Her softball and flag football career at Troup was a ride. It had its fair share of ups and downs, but it was a bittersweet ending to a long journey for the Tiger.

“It’s been somewhat of a roller coaster actually,” Cotton said with a laugh. “It’s been a long season, and it was sad to see it come to a close. I’m glad we did pretty well this season, it’s one of our best seasons yet, and I’m glad that we worked as a team through everything.”