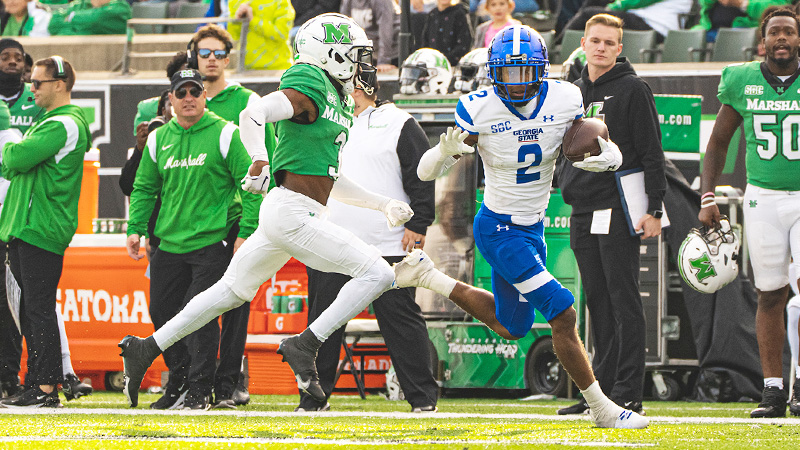 HUNTINGTON, W.VA.– Jamari Thrash had nine catches for 155 yards to cap one of the top receiving seasons in program history, but Georgia State suffered another close loss, falling 28-23 at Marshall in the season finale at Joan C. Edwards Stadium.

Thrash’s 12-yard touchdown catch gave the Panthers (4-8, 3-5 Sun Belt) a 17-14 advantage midway through the third quarter. After Marshall regained the lead with back-to-back touchdowns to go up 28-17 with 5:31 to play, Thrash hauled in a 54-yard bomb down to the Marshall 21-yard line on Georgia State’s next play. That set up Marcus Carroll’s 2-yard touchdown to pull GSU within 28-23 with 3:45 left. But the 2-point conversion pass was no good, and Marshall (8-4, 5-3) was able to run out the clock.

Thrash, the junior from LaGrange, recorded the fourth 1,000-yard receiving season in GSU annals, finishing with 1,110 yards on 60 catches. Only Albert Wilson (1,177) and Penny Hart (1,121) have more yards for the Panthers.

GSU quarterback Darren Grainger completed 19-of-26 passes for 291 yards and one touchdown, but he was sacked seven times, as the Panthers finished with only 74 yards rushing.

“I can’t say enough about this group of seniors who made such a difference in our football program,” head coach Shawn Elliott said. “These guys made a commitment to our football program, and they had to believe in what we were doing. They’ve seen as much success by Georgia State football as there’s ever been, and without those guys, we couldn’t have accomplished anything. That’s why it’s so unfortunate that it had to end the way it did.”

Georgia State jumped out to a quick lead as Grainger connected with tight end Kris Byrd for a 55-yard completion down to the Marshall 20 on the first play of the game. That set up a 3-yard scoring run by another super senior, Tucker Gregg, who scored his 12th touchdown of 2022 to tie the Panthers’ season record, set by Tra Barnett in 2019. That was the 28th career touchdown for Gregg, who already held that record.

The GSU defense forced a pair of missed field goals by Marshall, and in between, Michael Hayes booted a 33-yard field goal for a 10-0 led midway through the first half.

“We all understand it was a very disappointing year for us,” said Elliott, whose squad suffered four losses by a total of 11 points to snap their string of three straight winning seasons and bowl games. “We just could not finish games this year.

“We have to evaluate everything from the top down,” Elliott continued. “It’s going to take an outstanding off-season, an unbelievable spring practice and a commitment from everyone in our program.”