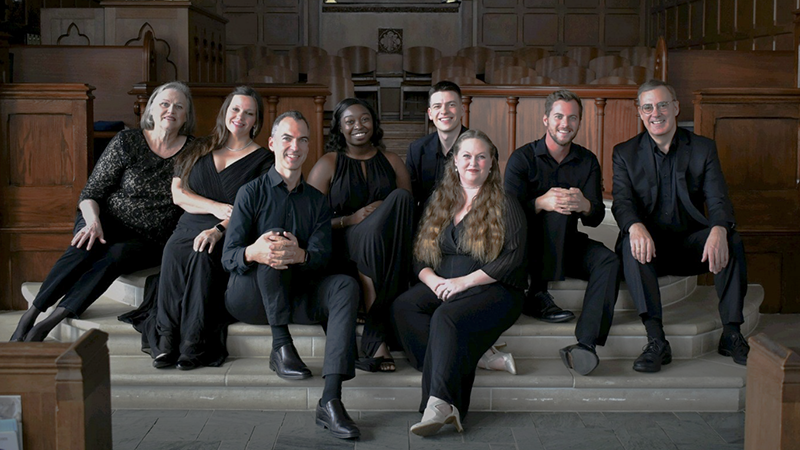 The new choral ensemble, STELLARUM, will give its inaugural performance “O Radiant Dawn” at First Presbyterian Church of LaGrange on Saturday.

The eight-member group primarily performs a cappella works from all periods. On Saturday, the group will be accompanied by guest artist, Andrew Harry, on a few songs.

The group formed in late summer and has been practicing for its inaugural performance since.

“We got going over the summer and just kind of realized we might be able to pull off a vocal octet, so we’ve been meeting once a month since then,” group member James Camp said.

The group is made up of experienced vocalists and musicians.

Everyone in the group is a professional singer of some sort, said member Rebecca Hafner-Camp. Many of the members also perform instruments as well, but they primarily plan to perform without instrumental accompaniment. Hafner-Camp is also an organist for St. Peter’s Catholic Church in LaGrange.

Hafner-Camp said group member, Dr. Richard Prior, came up with the name STELLARUM for the group.

“It means ‘of the stars,’” Hafner-Camp said. “Not that we’re stars, but the music has a heavenly sound. It is sacred music.”

Prior also helped the group with his experience as Music Director and Conductor for the LaGrange Symphony Orchestra.

Prior said the concert will have a bit of a holiday theme, but not entirely.

“I wouldn’t really say it’s really a Christmas concert per se. It’s got a little bit of everything,” Prior said.

“The group is pretty unique. There are examples of small a cappella groups, kind of around the world, that are very famous, that sort of specialize in this kind of music, but there isn’t one in this region,” he said.

Prior said there are many choral societies and church choirs all over the region, but there isn’t a specialized small chamber group, where you’ve got one or two voices on a part.

“That’s one of the things that makes it really special,” Prior said. “We would be thrilled for a full audience on the night. It is something quite special.”

“It’s going to be really beautiful, especially in that space, and very charming,” Camp said. “I’m really excited about it.”

Saturday’s concert isn’t a one-time performance. The group plan to continue performing together in the future.

Admission is free for STELLARUM’s inaugural performance, “O Radiant Dawn.” The concert will be held on Saturday, Dec. 3 at 7:30 p.m. at First Presbyterian Church on Broad St. in LaGrange.