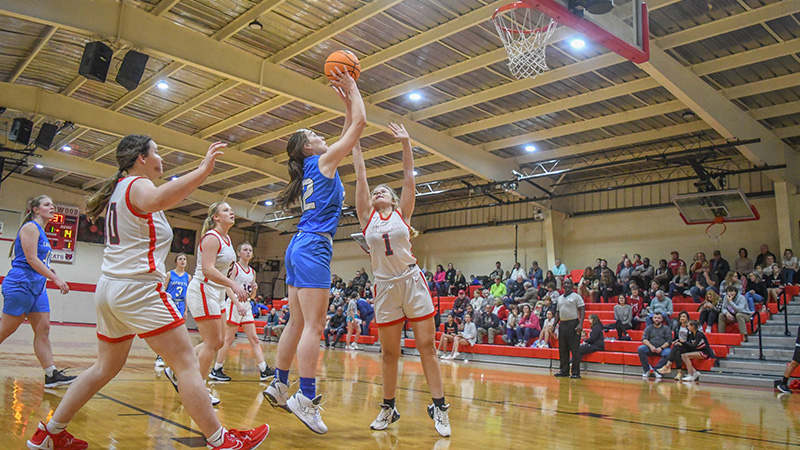 The Springwood Wildcats routed Lafayette Christian for the second time this season, leaving their home gymnasium with a dominant 62-16 victory Thursday night.

“I was pleased with our defense,” Wildcat coach Lisa Sampson said. “That’s what we’ve really been focusing on, but I was also pleased to get more kids involved in the game. That will be key later in the year for our rotations.”

While the Wildcats are rounding into form and have won back-to-back games for the first time this season, the Cougars are still trying to find their form as they integrate some girls who have never played basketball into their lineup, and it will be a process to get the girls accumulated.

“The girls are here, and they want to play,” Cougar coach David Curry said. “They really want to compete, and it is difficult against a team that is as good as Springwood. I just told the girls to compete and play better than last time, and I feel like it was.”

The Wildcats scored the first two points before the Cougars answered back with a basket of their own to tie the game. After that, it was all Wildcats as they went on a 12-0 run and then a 19-0 run to end the first quarter. It did not get better for the Cougars in the second half as the Wildcats continued to rotate some of their younger girls into the game.

The Wildcats outscored the Cougars 6-1 in the third quarter, but the Cougars were able to outscore the home team 7-6 in the final period to get a little momentum to take forward.

Carmen Bridges was involved with most of the good things the Cougars were able to put together on the night, scoring a team high 10 points. Leah Ward had four points and Anna Kate Bakavich had two to round out the scoring for Lafayette Christian.

“We’ve got a great post player in Carmen Bridges and a great guard in Leah Ward,” Curry said. “We don’t have a deep bench, so it can be hard to keep them fresh.”

Tori Patillo scored a game high 18 points — 16 of which came in the first quarter as she set the tone early for the Wildcats. Madison Robinson came off the bench and scored 12 points to help lift the Wildcats offense. The Wildcats had eight different scorers in the game as the offense shared the ball all evening.

“I think the girls did a good job executing the plays,” Sampson said. “The game is fun when everybody scores.”

Springwood improves to 3-2 on the season while Lafayette Christian falls to 0-3. The Wildcats play Valiant Cross at home on Dec. 6.

“We’re about everybody getting better defensively and everybody understanding what we are trying to do and having the ability to rotate, we were able to do that,” Sampson said.

The Cougars will be back on the court Friday as they host crosstown rivals LaGrange Academy.

“We can’t go out there and focus on the scoreboard,” Curry said. “It’s about getting better even if the game is a blowout.”