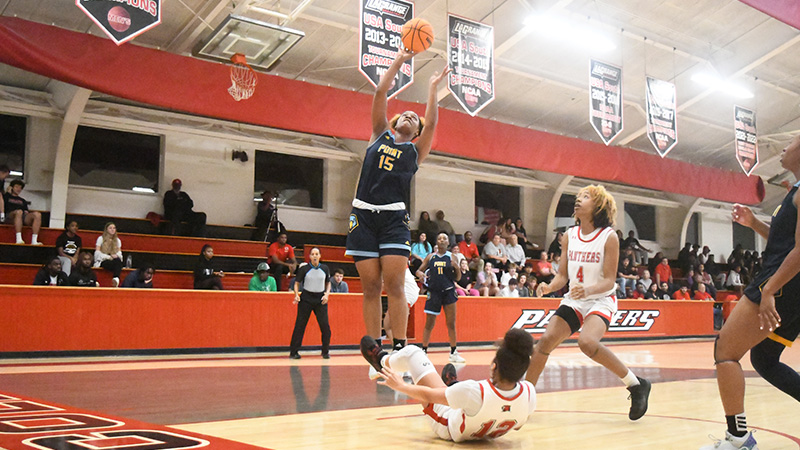 The Point University women’s basketball team came to LaGrange College with something to prove on Wednesday night and came away with a dominant 60-43 victory.

The Panthers garnered a 6-4 lead with 5:59 left in the first quarter when Amanda Mclendon made a layup, but that would be the last lead of the night for the home town Panthers as the Skyhawks suffocated them with a strong defensive presence.

Ky’Leo Worriels hit a layup with 17 seconds to play in the first quarter to give the Skyhawks a double-digit lead they would hold for the rest of the game as the Panthers could not chip into the lead.

Worriels was dominant off the bench for the Skyhawks. She finished as the leading scorer in  the game with 14 points while adding 10 rebounds and three blocks with the Panthers having no answers for her down low. The Skyhawks got another big-time bench performance from sophomore Ananda Hughley, who scored 13 points and hauled in five rebounds.

In fact, the entire reserves propelled Point to the win, outscoring the starters 36-24.

On the flip side, nothing much was falling for the Panthers on the night with Zhia Johnson and Laila Battle leading the team in scoring with 10 points apiece on a combined 6-for-22 from the field.

The loss snapped a three game winning streak for the Panthers and dropped them to 5-3 on the season. LaGrange College will travel to take on Troy in its next game on Dec. 14.

The Skyhawks improved to 6-4 and are gathering some momentum with a three game winning streak — all by double digits. Point will be back on its home court for a conference game against St. Andrews on Saturday. The Skyhawks are currently 5-3 in conference play.