Edmondson and Arrington qualify to run for mayor of LaGrange 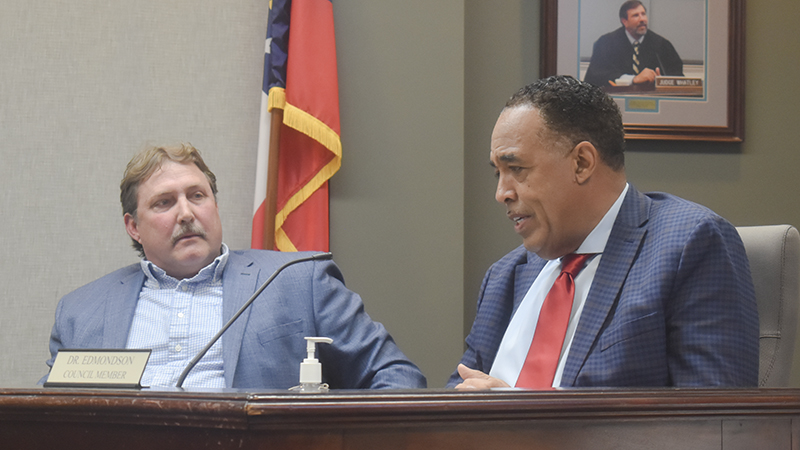 Councilmen Jim Arrington and Willie Edmondson resigned at the close of the LaGrange City Council meeting on Tuesday night. Both men qualified to run for mayor the next day. -- Tommy Murphy | Daily News

Former Councilmen Willie Edmondson and Jim Arrington both qualified to run for the mayor of LaGrange on Wednesday. Both men resigned their council seats at the end of the council meeting on Tuesday night.

Troup County Election Supervisor Andy Harper said only Edmondson and Arrington had qualified as of the close of qualifying at 1 p.m.

Both councilmen resigned the night before qualifying so that the remaining council members could appoint someone to Edmondson’s seat to maintain a council quorum. Quay Boddie was chosen to fill the seat in a 4-0 vote.

At the close of the meeting, Arrington was the first to announce his resignation, but he was immediately followed by Edmondson. Both councilmen would have lost their seats upon qualifying.

In his announcement, Arrington thanked the council members for their friendship over his time on the council and said he hopes to be back soon.

“I’m going to resign as councilman at the end of the meeting, but tomorrow morning I hope I will be the first person up at the election office to qualify to run for the office of mayor, so hopefully in two or three months from now, I’ll be coming back,” Arrington said, announcing his resignation.

“I think our citizens ought to be proud of what we’ve done,” he said. “I appreciate each one of y’all. I’ve learned things to do and things not to do through each one in the people and the relationships that formed I’m forever grateful.”

After Arrington announced his resignation, Edmondson did the same, thanking the other council members and city staff for their help during his two decades of service.

“With a heavy heart, I come tonight. I’m doing the same thing. I’ve been on the council for the past 24 years. I’ve worked with two great mayors. I’ve worked with a lot of great council members. I learned a lot,” Edmondson said. “I came on as a neophyte on the council with a lot of fire to get things done and found out we had to all work together.”

“At the end of this meeting, I will be resigning my position as councilman and I will be right there in the morning, hopefully with Councilman Arrington, to run for mayor of the City of LaGrange. I do appreciate the staff and especially this council. We work very good together, and I hope to be back on March 21 as your mayor,” Edmondson said.