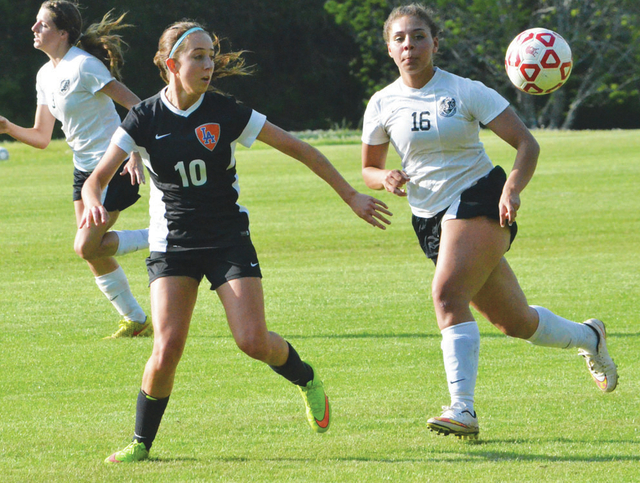 Caitlyn Croft was a four-sport standout for LaGrange Academy. She helped the basketball team win a region championship, and the softball reach the state tournament, and she made it to the second round of the state tennis tournament. Croft also scored the game-winning goal in a soccer victory over Callaway. Kevin Eckleberry | Daily News It was a heck of a ride.

The Warriors faced off against Trinity Christian in the state-championship game that was played in Carrollton, and it wasn’t their day.

Trinity dominated the game and won 5-0, but it was still a special season for LaGrange Academy.

It was also a big season for the LaGrange Academy girls’ basketball team, which won a region title and reached the second round of the state tournament.

There were plenty of other highlights throughout the 2014-2015 school year as well, and here are some of them, beginning with the boys’ soccer team quest for a title.

ONE GAME SHORT: LaGrange Academy’s boys’ soccer team overcame nearly every obstacle placed in its path a year ago.

The Warriors didn’t have an answer for Trinity Christian, though.

LaGrange Academy finished with a 16-3 record, and all three of those losses came against Trinity.

“I told the guys, no season ends well unless you win the last game, so nothing I can say will make you feel any better. But what a great ride,” LaGrange Academy coach Mike Petite said. “We played some phenomenal soccer all year long. We had great leadership, great team camaraderie. I couldn’t be any prouder to have a group of guys play that way. They played for each other, they played unselfishly, they enjoyed playing together.”

LaGrange Academy reached the championship game with a 2-0 win over Brandon Hall, with Daniel Wardlaw scoring both goals.

In the championship game, LaGrange Academy competed hard, but it was unable to keep pace with a powerful Trinity team.

Petite said the support the players received during the semifinal game and the championship game was much-appreciated.

“We had great support,” Petite said. “We had a lot of students up there. That’s great to have. It was fun for them to watch their classmates. That’s what the Academy is all about.”

WINNING A TITLE: After not making it to the state tournament the previous year, the LaGrange Academy girls’ basketball team was hoping to turn things around in the 2014-2015 season.

The Lady Warriors won a region championship and advanced to the second round of the GISA state tournament.

After winning the region title to earn a home game in the state tournament, LaGrange Academy outlasted Piedmont Academy 39-35 in the first round.

It was a 35-35 game when Jana Maddox scored with 1:12 to play to give the Lady Warriors a two-point lead, and they held on for the win.

The season ended for LaGrange Academy with a loss to Grace Christian in the second round of the state tournament.

“It’s been a great group. They’ve been a good leadership group,” said Petite, the team’s head coach. “They’ve come together, they’ve brought in the young ones and helped them. That is really what we need.”

BREAKTHROUGH SEASON: LaGrange Academy’s baseball program enjoyed a major rebound this spring, with the Warriors finishing second in their region to earn the right to host a state-playoff series.

LaGrange Academy lost to Monsignor Donovan in the first round, but it was still a major step forward for the program.

“It’s a tough loss all around for the seniors,” Lybrand said after the state setback. “I feel bad for him and how hard they’ve worked. One of the things we talk about is it started with them and building this program back up to where it was.”

The future looks bright with so many players returning, including a handful of eighth-graders who were thrown into the fire this season.

“A lot of the eighth graders, they’ve played, so they’ve gotten the experience, so they know what it’ll be like when they get in there,” Lybrand said.

SWINGING TO THE TOP: LaGrange Academy’s golf team walked away with a region championship this spring.

Nick Keating led the Warriors with a 95, and Chris Keating (97) and Payton Barr (98) joined Nick Keating on the all-region team.

Zach Callaghan (106) and John Whitlow (106) were LaGrange Academy’s other players.

“They put in time, and they got better,” LaGrange Academy coach Britt Gaylor said. “From where we are from the first match to this match was a tremendous improvement. We were proud of them.”

SERVING STRONG: Caitlynn Croft was a multi-sports standout during her time at LaGrange Academy, excelling in basketball, soccer, softball, as well as tennis.

On the tennis court, Croft made it to the final eight of the GISA Class AA individual state tournament.

In the first round, Croft beat Kimberly Veal 6-4, 6-0, and she fell to Perra Harrell in the second round.

On the boys’ side, LaGrange Academy’s Daniel Shin made it to the state tournament and fell in the first round.

SOFTBALL SUCCESS: LaGrange Academy’s softball team earned a third-place finish in its region last season to earn a spot in the state tournament.

LaGrange Academy clinched a state spot with a doubleheader sweep of Oak Mountain late in the season.

Among the team leaders were the team’s three seniors, Caitlynn Croft, Marybeth Cottle and Brandi Smalls.

The team received a big lift last season from freshman Ally Smith, who had a strong season on the pitcher’s mound.

LaGrange Academy lost to Windsor in the first round of the state tournament.

SOMETHING DIFFERENT: For the first time ever this spring, varsity sports teams from Callaway and LaGrange Academy met on the playing field, and it was worth the wait.

In a girls’ soccer match, Callaway and LaGrange Academy went back and forth and gave the fans a show.

LaGrange Academy ended up winning 4-3, with senior Caitlynn Croft scoring the decisive goal with a little more than 11 minutes remaining.

Croft scored twice in the game, despite having played two matches in the state tennis tournament earlier in the day.

Unfortunately for the Lady Warriors, they were unable to make it to the state tournament after finishing third in their sub-region.

LaGrange Academy had to finish second or higher to qualify for state.