Cavaliers get their work in 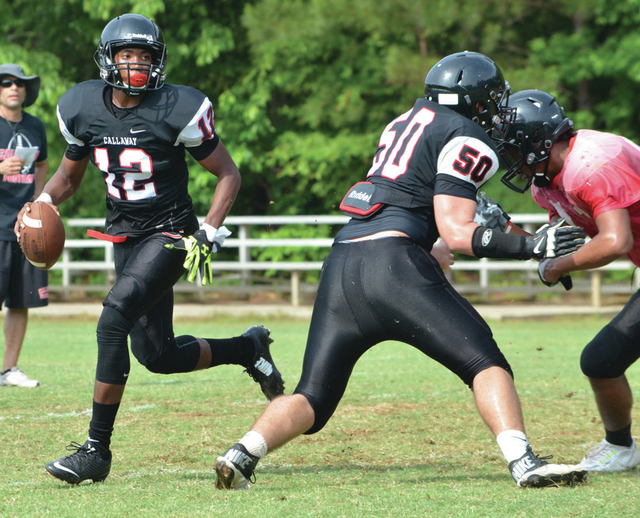 Callaway’s Braylon Sanders got plenty of work in as a quarterback and wide receiver during the Mike Hodges camp. Kevin Eckleberry | Daily News

It was all about the passing game this week.

A dozen Callaway High football players, along with some of the coaches, participated in the Mike Hodges quarterback and wide receiver camp on the campus of Middle Georgia State College in Cochran.

It’s a camp the Cavaliers have been participating in for years, and Callaway offensive coordinator Matt Napier said it’s an invaluable learning tool for the players.

This year’s camp kicked off on Saturday and wrapped up on Wednesday.

“It’s a key in our development in our quarterbacks,” said Napier, who was a camp instructor along with his brother and fellow Callaway coach, Kurt Napier. “For those guys to get to go be coached up by some of the best coaches who have ever coached the game is something you couldn’t trade for anything.”

As for the wide receivers, they got their hands on plenty of balls during the camp.

“I bet the receivers caught anywhere up to 2,500 passes,” Napier said. “It’s just limitless repetition with good coaches, teaching you the right way to do things over and over. It’s 10 full practices in a really short period of time.”

Dylan Johnson and Braylon Sanders, who will both be juniors next season, shared the workload at quarterback for Callaway.

Johnson was Callaway’s starting quarterback for both of the playoff games a year ago after an injury to starter Terry Godwin in the final game of the regular season.

Sanders was strictly a wide receiver last season and he had a phenomenal season, but he’s getting a look at quarterback this summer.

Sanders spent a lot of time at quarterback during spring practice with Johnson playing baseball, and he made a lot of big plays during the spring game.

Napier said the camp has played a key role in the development of Callaway’s quarterbacks and receivers over the years.

Napier said it’s a camp that really stresses the fundamentals.

“We go to all these seven-on-sevens, and we go up and compete at these other camps, and this one really narrows in on the basic fundamentals, from getting in the stance to taking your drop, to getting out of your stance in the wide-receiver position,” Napier said. “It ends with a competition between the guys, and you’ve got some of the best players in the state of Georgia at the camp. It’s a great experience, and it’s really a fundamental camp.”

Many of the same Callaway players are in Athens for the Mark Richt 7-on-7 camp, which began on Thursday and wraps up today.

“We’re excited to go down to Georgia and see how the guys compete,” Napier said. “We expect to compete well like we always do. You get to put the kids in front of those coaches, and they get to see them first-hand competing. You go against the top teams in the country.”

The schools participating in the camp compete in a seven-on-seven tournament, and Callaway has done well over the years.

“I think we’ve made the championship something like four of the last five years,” Napier said. “We’re the Buffalo Bills, though. We ain’t won it yet. We’ve lost in the championship game. But we’re proud of the way the guys compete.”

Players from Troup are also taking part in the Richt 7-on-7 camp.

A different group of Callaway players will be heading down to Cochran on Saturday for the start of the Mike Hodges offensive-line camp.

That camp will run through Wednesday.