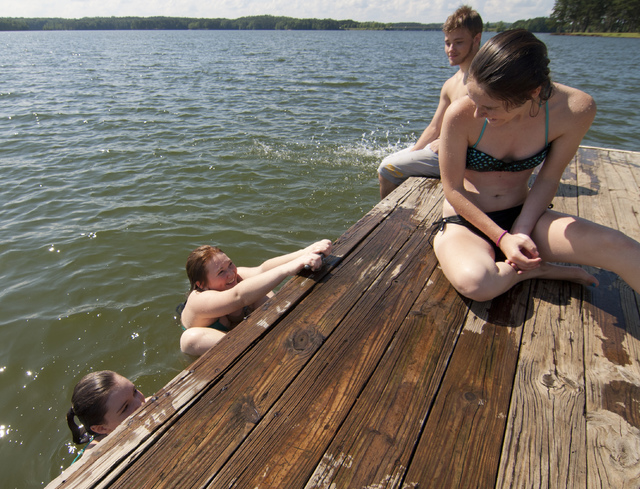 Henry Jacobs, an outreach coordinator for the Chattahoochee Riverkeeper, samples river water for E. Coli bacteria in LaGrange on Thursday. Despite a widely shared post on social media, the Chattahoochee Riverkeeper and the U.S. Army Corps of Engineers said Thursday that West Point Lake is indeed safe for swimming.

The post, which was shared on Facebook among area residents, was a 2009 video news package from an Atlanta-area TV station warning people that the lake was “unsafe” for swimming because of high bacteria levels, according to Jay Jamison, chief park ranger of the corps’ West Point Lake Project.

“There had been an apparent news article back in 2009 when there was a big flood, I guess that was being spread around Facebook, but that’s not the current condition of the reservoir,” said Jamison. “All of our campgrounds are open to the public and we want the public to come out and recreate and spend time at beautiful West Point Lake.”

“We test (the waters) two weeks prior to the openings (of the beaches) or if we have substantial amount of rainfall into the river basin, or when we feel the need to,” Jamison said. “As you know, the lake levels, as of yesterday, have been above full pool.”

Henry Jacobs, an outreach coordinator for the Chattahoochee Riverkeeper, also said the riverkeeper conducts independent water quality monitoring to ensure the safety of the lake and river for the public.

“We monitor four different locations on the Chattahoochee River above and below West Point Lake,” Jacobs said. Every week, volunteers collect water samples from Franklin, Whitesburg, Capp’s Ferry and the city of West Point and test for E. Coli, a harmful bacteria, he said.

The samples are taken to the Chattahoochee Riverkeeper’s office in LaGrange where Jacobs uses sophisticated instruments to measure the levels of E. Coli in the water.

Jacobs said it’s normal for bacteria levels to spike after heavy rainfall events. That’s because rain washes animal waste and other contaminants into the river basin where it eventually flows into the Chattahoochee.

For example, samples taken in Whitesburg by riverkeeper volunteers measured 1,860 colony forming units per 100 milliliters on May 27. A day prior to that measurement, the area received more than an inch of rain, according to the National Weather Service.

At that same sampling location in Whitesburg on May 13, the samples showed only 85 colony forming units per 100 milliliters — a significantly lower number. That’s because there had been no rain in the area for more than a week, Jacobs said.

A safe level of bacteria is below about 300 colony forming units per 100 milliliters, Jacobs said.

The public can check area water quality reports by visiting www.chattahoochee.org and the data collected by the riverkeeper is kept in the same standards as the U.S. Environmental Protection Agency and is legally able to be used in the court of law, Jacobs said.

For more information on West Point Lake, visit the corps’ website at www.sam.usace.army.mil/Missions/CivilWorks/Recreation/WestPointLake.aspx