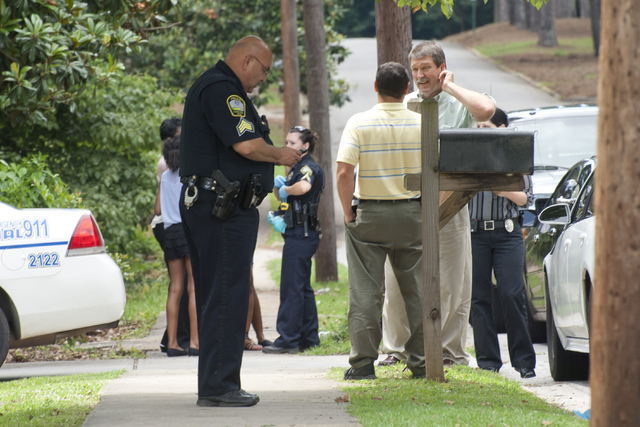 LaGrange police Sgt. Rogelo Perez, left, investigates the death of a man found at a home in the 100 block of Turner Street on Thursday.

Police are investigating the death of a 53-year-old man found inside his home on the 100 block of Turner Street on Thursday afternoon.

No foul play is preliminarily suspected, according to a responding officer.

The man was discovered after the man’s landlord and a lawn maintenance crew noticed his car had not been moved for some time, according to police. Both men also told officers they smelled an odor coming from the home. When they entered the house, they found the man’s body inside the bathroom.

First responders arrived on the scene and pronounced the man deceased.

The man had lived in the home since 1998, according to the landlord.

The cause of death determination is pending.

A man told police two men tried to rob him at gunpoint early this morning on Pierce Street in LaGrange.

Police responded to the 200 block of Pierce Street around 1 a.m. today and the victim told officers two unidentified men approached him while he was sitting inside his car. He said both men pointed guns at him and demanded he” give them what he had,” according to a press release from LaGrange police.

According to the report, the victim told the suspects he didn’t have anything and was then struck in the face with one of the firearms.

The victim was then able to gain control of one of the attacker’s guns and chased the men on foot.

A man was arrested on charges of driving under the influence of alcohol this morning on Peters Street in LaGrange.

A LaGrange police officer spotted a 1990 Oldsmobile traveling at a high rate of speed through stop signs around 2:50 a.m. this morning morning on Peters near Mulberry Street. After stopping the car, the officer reported smelling an odor of alcohol from inside the vehicle. According to the report, the driver failed a field sobriety test but refused to take a breathalyzer to measure his blood alcohol content level.

He was arrested and charged wit DUI and issued citations for stop sign violations.

The woman also told police she was notified by her bank that her debit card had been used in three different locations and someone had removed an additional $200 from her checking account.

• A manager at Belk’s department store on Lafayette Parkway told police he had surveillance footage of an employee taking money from a cash register on several different dates. The amount totaled $125, according to police reports. When confronted with the accusations, the employee reportedly confessed to stealing the money so she could gas up her car. The employee was arrested and taken to the Troup County Jail.

• A man staying at the Comfort Inn off Lafayette Parkway reported $200 worth of tools were stolen from the bed of his Ford F-150 truck sometime during the night of June 3.