Program can help find loved ones 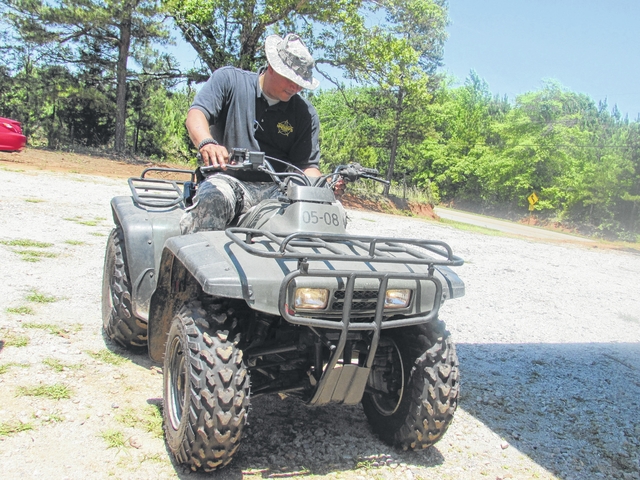 A Troup County sheriff’s deputy uses an ATV to check the area near Shake Rag Road on May 23 during a search for Leroy Hubbard, 87, who went missing from a home on Shake Rag Road. As of this morning, Hubbard has not been located.

Time is of the essence when children go missing, and it’s no different for adults who suffer from disorders like dementia or Alzheimer’s and wander away from their homes.

Law enforcement officers must work against the clock to locate senior citizens, like the Troup County Sheriffs Office did a few weeks ago after the disappearance of Leroy Hubbard, 87. For almost two weeks, deputies used all-terrain vehicles, K9s and a Georgia State Patrol helicopter to try and find the elderly man who last was seen May 22 at a home on Shake Rag Road.

Hubbard has yet to be located.

The sheriff’s office also has another weapon in its arsenal in finding missing adults. The department is trained to use the Project Lifesaver program. Project Lifesaver is a nationwide nonprofit organization used to track those with cognitive disorders like dementia and Alzheimer’s.

People who are enrolled in the program wear a small personal transmitter around the wrist or ankle that emits an individualized tracking signal, according to the Project Lifesaver website. If that person goes missing, the caregiver notifies the local Project Lifesaver agency and a trained emergency team responds to the wanderer’s area.

“If a client wanders off and the transmitter is working properly and has not been removed from the client, it can cut down the recovery time significantly,” said Sgt. Stewart Smith, public information officer with the Troup County Sheriff’s Office.

Clients usually are found within a few miles from home within 30 minutes from when law enforcement authorities are notified, according to information from Project Lifesaver.

The Troup County Sheriff’s Office has been a part of the program since 2007. Smith said several deputies have been trained on how to use the locating equipment.

The device also can be used on children who may be at risk for wandering away and suffer from disorders such as autism or Down’s syndrome, states the Project Lifesaver website.

“A potential candidate or family member contacts the sheriff’s office regarding the program,” Smith explained. “The client must have a doctor specify that they have a condition that would cause them to wander or have some type diagnosed issue such as dementia … The only cost to the client is a $10 monthly charge when the battery and wristband are replaced.”

Smith said along with TCSO, the West Point Fire Department and Harris County also have locating equipment with Project Lifesaver.

Anyone wanting to sign up a loved one for Project Lifesaver is asked to contact Sgt. Stewart Smith at the Troup County Sheriff’s Office at 706-883-1616.

Hubbard was not a client of the Project Search program, said Smith.

He is described as an older African-American man, standing about 6 feet tall, weighing 160 pounds with white hair and a white beard. He was last seen possibly wearing a red-and-blue, long-sleeve flannel shirt, beige hat, blue jeans and brown boots.

Anyone who believes they have seen him is urged to contact 911.