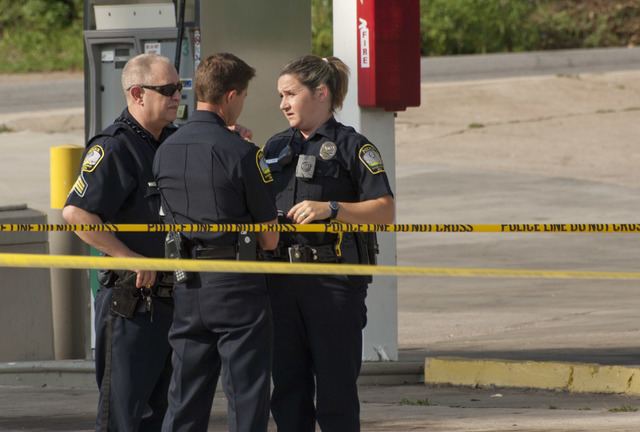 LaGrange police respond to a shooting in the 500 block of Hamilton Road on Monday afternoon. Two people were injured, police said.

One man was shot and a woman was injured, possibly by shattering glass, at a BP filling station in the 500 block of Hamilton Road around 5:45 p.m., according to LaGrange police Capt. Mike Pheil. Their conditions were unavailable at the time of this article’s publication.

A woman who identified herself as Rose Hajie, the owner of the BP, said two men came into the store and bought beer prior to the shooting.

“They were just in the store,” Hajie said. “Then they walked outside and I heard the shooting.”

Pheil said the two suspects allegedly approached a black-in-color car parked outside the store and fired several shots, at least one of which struck a man who was inside the car. The suspects then drove away, possibly down Colquitt Street, in a late-model, blue-in-color Buick sedan, Pheil said.

The two occupants of the black-in-color car drove away on Hamilton Road and eventually went to West Georgia Medical Center. Police were contacted and went to WGMC to investigate. The victims’ car was at WGMC and police were processing it for evidence.

Read LaGrange Daily News online and in print for updates on this and other stories.