Superstar Camp back for another year 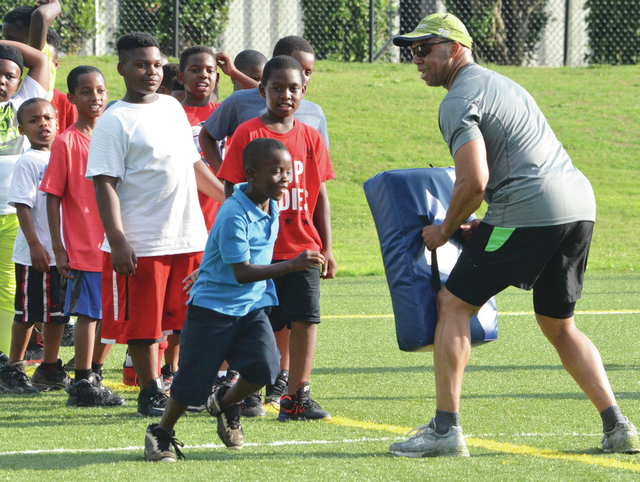 Travis Hart, one of the instructors, talks to the campers at the close of Friday’s camp session. Kevin Eckleberry | Daily News It’s a word that has served Steve Wallace well throughout his life.

Wallace, a former NFL standout who was a part of three Super Bowl teams with the San Francisco 49ers, developed a pattern of behavior early in life that has helped him tremendously.

“I’ve got a word that is very important in my life,” Wallace said Friday evening to more than 100 young people during the West Georgia Superstar Football Camp. “I spell it F-O-C-U-S. It’s all about focus, gentlemen.”

Wallace was one of the many marquee instructors helping out during an event that has been a fixture in LaGrange for more than two decades.

The camp was started by Troup County native Ruben Hairston, who was playing in the NFL at the time and was looking for a way to help out his hometown.

Now, 23 years later, the camp is still going strong, and Hairston is hoping a new generation of young people will be inspired by being around positive role models like Wallace.

“They see people like that, it encourages them to do the right thing,” Hairston said.

Wallace said that “focus” which has been such a big part of his life helped him succeed not just in football, but in the class room as well.

“My dad said let’s get it right son, and I started making As and Bs, because I started trying at everything I did,” Wallace said. “The next thing I knew I was being recruited by 57 different colleges and universities.”

While football obviously worked out for Wallace, he told the campers that their most likely road to success will be through education.

“Everybody can play football,” Wallace said. “Everyone can play baseball, and basketball and all of that. But education, gentlemen, there is no limitation. You can be a doctor, you can be a lawyer. Don’t let anyone get in your way.”

When it comes to football, Stargell told the campers a key to succeeding will be to pay attention to those trying to teach them.

Another camp instructor is Travis Hart, an all-state linebacker who was a part of three state-championship teams at LaGrange High.

Hart told the campers to make sure to “stay grounded” no matter how much success they have.

“Some of you are going to play for a long time, and it gets tough,” Hart said. “A lot of things come along with this game, so you’ve got to stay grounded. If you have something to stay grounded on, it’ll help you.”

Hart said he’s hopeful the young people will learn some valuable lessons during the two days of the camp.

“The knowledge out here is going to help you,” Hart said. “Don’t think you’re coming out here today just to have fun. You’re also coming to learn something.”

On Friday, the more than 100 young people who signed up for the camp went from station to station and participated in a handful of different drills run by the instructors.

At the close of Friday’s session, the campers were treated to a meal.

The camp will wrap up today, and anyone interested can come out and participate.

It’s free and is open to boys and girls ages 8 to 18, and there is also a cheerleading camp going on at the same time.

Today’s camp session will run from 9 a.m. until noon.