Warriors on the water 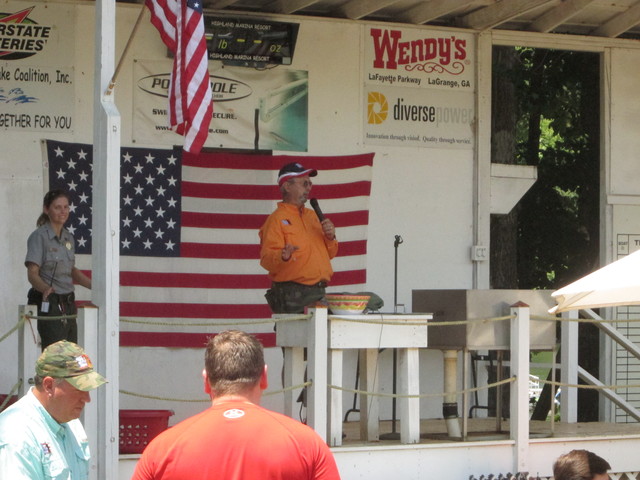 Greg Pate poses with Elton Brown, an active duty soldier, and his son, Donovan Brown, and some of the striped bass they caught during the Take A Warrior Fishing tournament at Highland Marina on Saturday. Pate and his son, Dustin, were among more than 65 boaters who volunteered for the event. Jim Owens, founder of C.A.S.T. for Kids and Take A Warrior Fishing, announces his retirement during the barbecue lunch at Highland Marina.

Veterans and their family members gathered at Highland Marina on Saturday for the annual Take A Warrior Fishing program at West Point Lake.

The event paired local anglers or boaters with veterans for a tournament that lasted until noon and ended with a barbecue lunch at Highland Marina.

“We had about 65 veterans come out today for the tournament,” said Patrick Harmond, an Army veteran of 34 years who works with the Wounded Warrior Foundation, on Saturday. “A lot of them caught fish, but the ones who didn’t still had a good time. A lot of these guys don’t get to be outside a lot and do things like this. This is very good for them to come out here and be at peace on the water.”

The event was organized by the C.A.S.T. for Kids Foundation, which introduces special needs children and military veterans to the sport of fishing. C.A.S.T. stands for “catch a special thrill.”

Jim Owens, founder of C.A.S.T., began the Take A Warrior Fishing program in 2011 after he saw a need to help military service members returning home from armed conflict. After Saturday’s tournament, Owens announced that this would be his last event; he plans to retire soon.

“I couldn’t think of a better place to end my career of organizing these events than at Highland Marina,” said Owens. Highland Marina owners “Danny and Chris Ellrich have been the most hospitable people I’ve worked with, and this is such a beautiful lake. I wanted to do one last event here at West Point.”

Veterans were laughing and sharing fishing stories Saturday during the barbecue lunch while organizers of the event raffled off several items to lucky service members.

“This can work wonders for our veterans that are just getting back,” said Army Sgt. 1st Class Ronald Williams, who is still serving. “Fishing is therapeutic and we have veterans coming back dealing with TBI (traumatic brain injury), PTSD (post-traumatic stress disorder), anger management or even financial problems. When you get out here on the water, it’s just a release from all of that.”

Williams mentioned that he caught nine fish with his boater, Rocky Jennings. While other veterans didn’t experience such luck with a rod and reel, they still enjoyed their time on the water.

“This whole event today was awesome,” said Patrick Booker, an Army veteran. For me, just to be able to get out of the house and have fun was great. I didn’t catch any fish, but my favorite part was riding on the boats and speeding down the lake.”

Veterans like retired Army Sgt. 1st Class Carl Burnett have participated in the event in years past. However, Burnett showed up with his own boat on Saturday and took another warrior fishing.

“When we come back from serving, sometimes we feel like nobody cares,” said Burnett. “When we get to come out to things like this, we see that they do and we know that we did something good for our country. As a veteran, I know exactly how it feels.”

Husband and wife Danny and Chris Ellrich were happy with the event’s success and noted that the number of participants has grown each year.

“It really makes you feel good to see all of these veterans out here smiling and enjoying themselves,” said Chris Ellrich. “We have two nephews and a niece that are serving right now, so we know what its all about and we’re more than happy to host something like this. It’s the least we can do. We’re just paying them back a little bit for all they’ve done for us.”

Ellrich noted that she would like to see the event increase in size. She hopes that next year’s tournament will feature a larger number of sponsors, boaters and warriors.