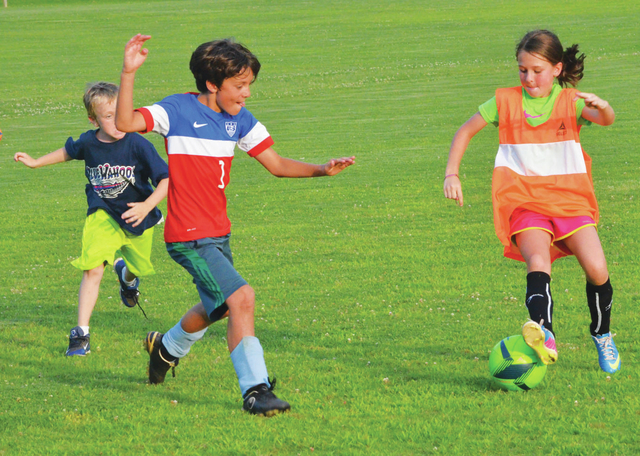 Keita Placide’s youth soccer camp will run through Friday, and the campers will be on the field for three hours each day. Kevin Eckleberry | Daily News

It’s a decade and counting.

When Keita Placide became the head coach of the LaGrange High boys’ soccer team in 2005, the native of Trinidad and Tobago wasn’t sure what the future held.

Would he be in LaGrange for a short while before moving on, or would this be his home for a while?

Well, it is 10 years later, and Placide is still going strong as the Grangers’ head coach, and he’s also an active figure in the local youth soccer scene as a coach with the Troup County Titans.

Placide has also, for each summer over the past 10 years, held a youth soccer camp where he looks to pass along his love of soccer.

This year’s youth soccer camp got under way on Monday at the Whitesville Road soccer complex, and it will go through Friday.

For three hours each evening, Placide and fellow instructor Donnie Palmer will keep the girls and boys hustling up and down the field, trying to teach them the finer points of the sport.

“This is the time of the year where it’s not heavy, it’s more focused on the little kids and enjoying it,” Placide said.

Placide already knows a lot of the children from his work with the Titans.

Placide said he loves getting out on the field with the campers, and just spending time with the people in what he calls his “adopted community.”

“They’re part of my family,” Placide said. “This is my adopted community. It feels good giving back, and just hanging out for the kids for a little bit.”

A month ago, Placide was putting the wraps on his 11th season as the LaGrange boys’ soccer coach.

It was another successful season for the Grangers, who reached the state playoffs where they lost to Greenbrier 2-0 in the first round.

That was a senior-laden team, with 12 Grangers wrapping up their time as LaGrange soccer players.

When the Grangers convene for a new season next spring, they will have a drastically different look with so many new players set to join the starting lineup.

Placide will get an early look at how those players will perform in a game-like situation beginning next week.

LaGrange, along with Callaway, Troup and LaGrange Academy, is participating in a summer seven-on-seven league.

The teams will have six different play dates, and a champion will be crowned on the final day of competition in July.

“Each team will get two games, and every week we’ll rotate, and on the 25th of July, we’ll have a grand knockout tournament where it’ll be all day soccer,” Placide said. “It’ll be fun for them.”