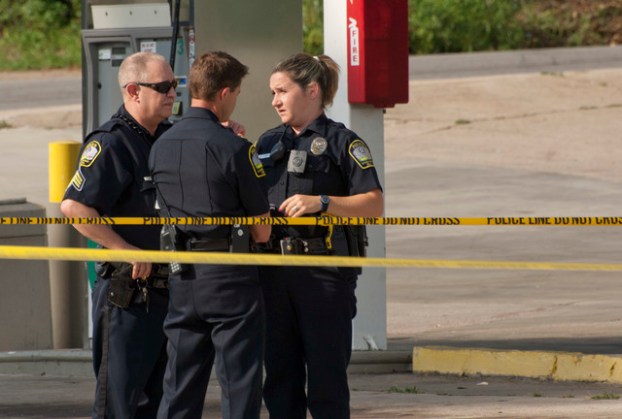 LaGrange police respond to a shooting outside the BP at 517 Hamilton Road on Monday afternoon. Two people were injured, police said.

One man, Andre Bennett of LaGrange, was shot in the leg and a woman was injured by shattering glass inside a car when a gunman approached them and opened fire outside the BP gas station at 517 Hamilton Road about 5:40 p.m., according to LaGrange police Capt. Mike Pheil.

A third person — a juvenile — was also inside the car but was uninjured, police said.

A woman at the BP said two men came into the store and bought beer prior to the shooting.

“They were just in the store,” she said. “Then they walked outside and I heard the shooting.”

The shooters allegedly approached Bennett, the woman and the juvenile while they were in a car parked outside the BP. The gunman fired several shots, at least one of which struck Bennett inside the car. The suspects, described by police as two African-American men, then drove away, possibly down Colquitt Street, in a late-model, blue Buick sedan, Pheil said.

Bennett, the woman and the juvenile drove away on Hamilton Road and eventually went to West Georgia Medical Center, Pheil said. When the trio arrived at the hospital, police were contacted and went to WGMC to investigate. The victims’ car was at WGMC and police were processing it for evidence Monday.

The Gangster Disciples street gang has placed a “kill on sight” order on Bennett for allegedly assaulting other Gangster Disciple members and cooperating with police in another investigation, according to May 29 Troup County Magistrate Court testimony by LaGrange police gang investigator Ray Ham.

LaGrange police detective Ley Wynne also testified May 29 in magistrate court that the “blessed hit” came from a high-ranking member of the Gangster Disciples, based on evidence collected by police.

Police say Bennett was outside a home on McGregor Street on April 14 with Tony Kennedy, 21, of LaGrange when Kennedy was fatally shot. Cordarius Collier, 21, of LaGrange, and three other people have been charged in Kennedy’s shooting. Police believe Bennett was also a target in that shooting, but the gunmen missed.

Kennedy was allegedly kicked out of the Gangster Disciples for the same reasons as Bennett, according to Ham’s testimony.

Police filed arrest warrants for Christopher Foster, 17, of McGregor Street, Tyler Dunson, 17, of Belk Street and Cherise Newton, 21, of Murphy Avenue for the April 14 shooting of Kennedy. Foster and Dunson are in custody while Newton remains at large as U.S. Marshals and other law enforcement agencies attempt to locate her.

Police are still searching for the firearms used in that shooting, but believe the suspects disposed of them in an unknown body of water.