Superstar Camp is a wrap 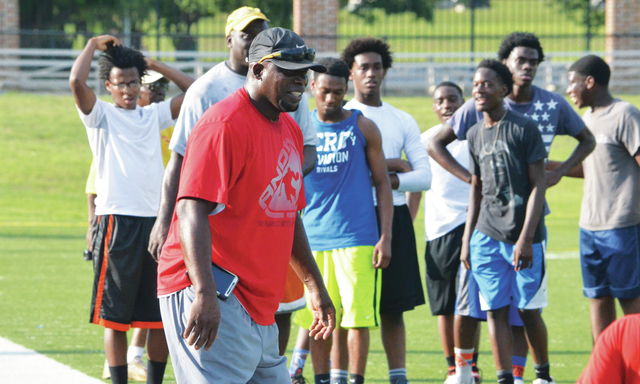 Some of the participants in the West Georgia Superstar Football camp take part in a drill. The two-day camp wrapped up on Saturday. Kevin Eckleberry | Daily News A cheerleading clinic was held in conjunction with the football camp this year. Kevin Eckleberry | Daily News Another one’s in the books.

For the 23rd consecutive summer, the West Georgia Superstar Football Camp was held in LaGrange, and more than 100 boys and girls turned out for this year’s event that was held on Friday and Saturday at Callaway Stadium.

As always, it was a star-studded group of instructors that featured former college and professional standouts, including a player picked first in the NFL draft, as well as a three-time Super Bowl champion.

The camp was created by Ruben Hairston more than two decades ago while he was playing professional football.

Hairston wishes there had been a larger turnout this year, but he said he’s committed to continuing what he started.

“I’m still kind of disappointed more aren’t taking advantage of it,” Hairston said. “It’s free, and they get some good knowledge, some good information. But we’re not going to give up. We’re going to keep doing it.”

One positive change this year was the weather.

In the past few years, rain played havoc with the camp, and a few of the camp sessions had to be cancelled because of the weather.

That wasn’t the case this year, with both camp sessions held under clear skies.

Among the instructors, it was a familiar group.

While Hairston played his college football at Fort Valley State, there is always a distinct Auburn flavor among the camp instructors.

Among the instructors who return year after year is former Auburn star Aundray Bruce, who was the number one selection in the 1988 NFL draft by the Atlanta Falcons.

Another former Auburn Tiger who comes back each year is Steve Wallace, who won three Super Bowl championships with the San Francisco 49ers.

Another marquee instructor was former LaGrange Granger Tony Stargell, who was a defensive back in the NFL for eight years.

The coaches were teaching football, but they were also trying to get life lessons across to the campers.

Stargell’s message to the campers was to make sure to choose their friends wisely.

“If you have friends that try to talk you into doing drugs, or drinking beer, or smoking cigarettes, you tell that friend don’t call my number no more,” Stargell said. “That’s the kind of friend you don’t want to be around. If you ever get a friend that tells you, hey man let’s stay after school, let’s go smoke, do not call my phone number ever again. Get rid of that friend. He’s not your friend. Those are the type of guys that will bring you down.”

Stargell added it’s important to “always respect your parents, your school teachers, your coaches, and God.”

It wasn’t just football this year.

For the first time, a cheerleading clinic was held in conjunction with the football camp, and dozens of young girls participated.

“We had a lot of little girls participating in the cheerleading, so that was good,” Hairston said. “Hopefully that’ll grow and get bigger and we’ll have a lot more people involved in that.”