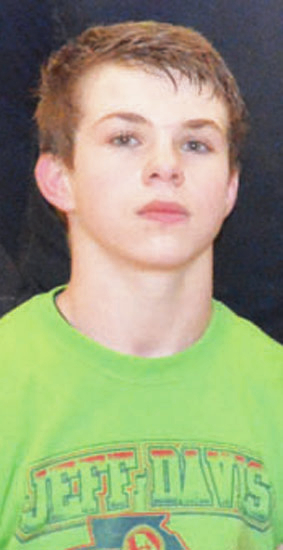 He’s ready to take on the best.

Chase Seals, who enjoyed a stellar freshman season as a wrestler at Troup High, is heading to Pennsylvania this week to participate in a marquee event that will bring together some of the best high-school wrestlers in the country.

Seals will be wrestling for Team Georgia, which will face off against teams from other states in the Cadet National Duals.

The tournament, which will be held in York, Pa., begins on Wednesday and runs through Saturday.

Seals will be wrestling in the freestyle and Greco-Roman divisions.

“I’m pretty excited about it,” Seals said. “It’s going to be a fun experience for me.”

To reach this point, Seals had to make it through a qualifying tournament that was held at Life University last weekend.

Seals finished first in his weight class in the freestyle division, and he was second in the Greco-Roman division.

“It was pretty intense,” Seals said of the state competition.

The top finishers in the state tournament were invited to join Team Georgia at the Cadet National Duals.

The team will check in today, and the action gets under way Wednesday at 9 a.m.

This will be the first of two big-time events Seals will be participating in this summer.

In July, Seals will be taking part in a national tournament in Fargo, North Dakota.

He won an area championship, finished fifth at the state sectional and competed in the state finals.

Shortly after the high-school season ended, Seals wrestled in the Georgia freshman state meet in the Georgia Dome, and he took the top spot in his weight class.

Seals was part of a strong freshman class that also included Trevor Upchurch and Brantly Robinson, who both made it Macon for the state finals.

Seals, Upchurch, Robinson and Scott Hicks all participated in the freshman state meet.

Hicks finished third in his weight class, Robinson came within one victory of placing, and Upchurch won one match.

Upchurch will be joining Seals at the event in Fargo.

Troup head wrestling coach Craig Garner said the wrestlers who’ll be a part of the 2015-2016 team have been working hard this summer.

Last weekend, Troup participated in a dual tournament at Luella High School where the wrestlers got a lot of mat time.

“They wrestled five or six duals up there against different teams,” Garner said. “Twelve or 13 went up there for that.”

Garner said the goal is to make the summer a much busier time for the wrestlers than it has been in past years.

Garner took over the wrestling program before the 2014-2015 season.

“That’s what we’re trying to kind of bring that nobody has in a long time,” Garner said. “It’s kind of like we do with summer baseball. There are a lot of matches, a lot of experienced to be gained over the summer, that nobody’s done with these guys for a long time.”

Garner is also the Troup head baseball coach, and he has been busy with that in recent weeks.

His brother Drew Garner, an assistant wrestling coach at Troup, has been directing things with the wrestling team this summer.

“He can handle all my wrestling stuff right now, while I’m doing summer baseball,” Craig Garner said. “That helps.”