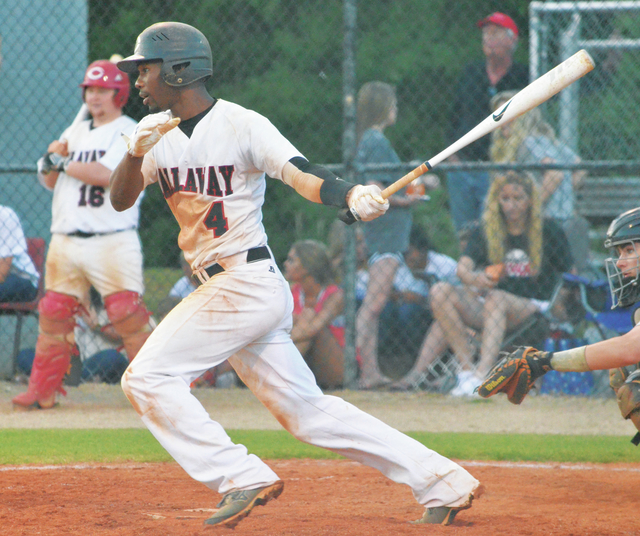 Former Callaway Cavalier Terry Godwin was drafted in the 33rd round of the baseball draft by the Atlanta Braves. Kevin Eckleberry | Daily News

The Atlanta Braves liked what they saw.

Former Callaway Cavalier Terry Godwin, who is now a freshman at the University of Georgia, worked out for the Braves two weeks ago at Turner Field, and he apparently made quite an impression.

This afternoon, the Braves selected Godwin in the 33rd round of the Major League Baseball draft.

Godwin will now have to decide if he wants to sign with the Braves and begin his baseball career, or go ahead and play football for the Bulldogs this fall.

Godwin would be a freshman wide receiver for the Bulldogs.

Godwin reported to Georgia last week, and he is already taking classes and participating in workouts with his teammates.

Callaway baseball coach Dusty Hubbard, who is also the defensive coordinator on the football team, said Godwin is settling in nicely in Athens.

Callaway participated in a seven-on-seven tournament at Georgia on Friday.

“I was able to see him last Friday when we went up there,” Hubbard said. “He’s fitting in. You can tell all the new guys they’re kind of sticking together, and they look like they’ve got a good group of kids. I think he feels like he belongs up there right now.”

Godwin enjoyed a remarkable stint as a football player at Callaway.

He was a four-year starter who excelled as a wide receiver, defensive back, quarterback and kick returner.

Godwin was also a standout on the baseball team, and he was a starting third baseman for a team that won a region championship and reached the Class AAA state quarterfinals this spring.

“You get calls from everybody, and so many people think when they see him he’s just an athlete playing baseball, but he’s played baseball his whole life,” Hubbard said. “He’s just like the rest of my kids. He’s played since he was 6 or 7-years-old. He played for us, if you count his eighth grade year, for five years. And he’s dedicated to it, and he understands the game. He knows how to play the game. That says a lot for him. He just had to divert his time in so many different ways.”

Godwin played baseball, basketball and football throughout his time at Callaway, and he excelled at all three sports.

On the baseball diamond, Godwin was primarily a third baseman, although he also pitched.

During his workout with the Braves, Godwin worked a lot as an outfielder.

While the consensus feeling is that Godwin will play football, Hubbard said “you never know.”

“There are a lot of people that would like to have that decision to make,” Hubbard added. “I know he has to be excited about it. He’s worked hard at it.”