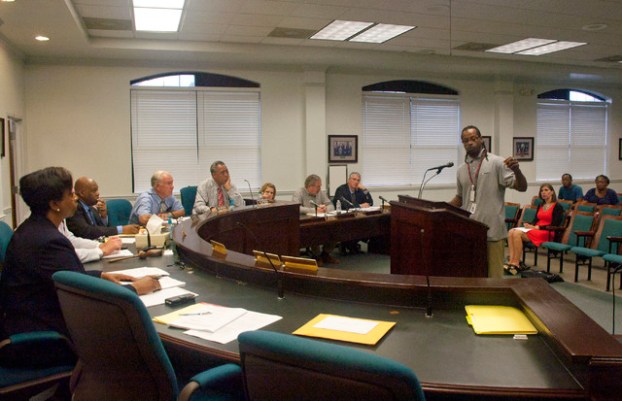 Eric Sanders, a resident of Ware Street, addresses the LaGrange City Council about the need to remove a stop sign at the intersection of Ware and South Dawson streets. Sanders began a petition and collected signatures from his fellow residents who want the sign removed.

LaGrange City Council held a public hearing Tuesday on whether to remove a stop sign it installed two weeks ago at the intersection of Ware and South Dawson streets.

The city installed the sign after residents near the intersection complained that speeding motorists are putting pedestrians in danger. City Council voted in March to install the sign based on those complaints, but now has received a petition to remove the sign.

Tuesday, council members listened to people from both sides of the issue during a public hearing.

Eric Sanders, a resident of Ware Street, began the petition against the stop sign, which was signed by seven residents on the street. He said the stop sign has caused problems.

“In the area that this stop sign was put up, we only have three houses until you get to another stop sign,” said Sanders. “There is no need for this sign.”

Sanders said that his family has owned the home he lives in for over 50 years and he noted that the traffic on Ware Street has increased in recent years.

“I was told that the reason this stop sign was put up was for the safety of the children,” Sanders said. “There are only two houses on the street that have children and they also have a big yard, so there’s no reason for those children to be out in the street.”

Sanders noted that many residents park their vehicles on Ware Street and the installation of the stop sign has created a bottleneck for traffic at the intersection that did not exist before the sign was placed.

“This stop sign isn’t doing what it was designed to do,” Sanders said. “If we’re going to make the neighborhood safer for the children, maybe we need sidewalks or a traffic light, but a stop sign doesn’t solve the problem.”

Dr. Robert Tucker, president of the Calumet Village Neighborhood Association, is also resident on Ware Street. Tucker, who was in favor of leaving the stop sign in place, said that it is common to see cars coming down the road at 50 or 60 miles per hour.

“All I would request that this council do is to ensure, to the extent that you can, the safety of that community,” said Tucker. “Both myself and my neighbors agree that the safety of people in our community is important, we just differ on what we think should be done.”

The City Council could choose to install a flashing yellow light at the intersection in order to alert drivers and get them to reduce their speed, said City Manager Tom Hall. Installing a traffic light in the area may not be economically feasible, he noted.

City Council chose not to vote on the issue, opting to give Hall time to research other means of slowing traffic at the intersection.

“I would like to have the opportunity to do some research on costs and alternatives that we could use,” Hall said. “I will be working with the police department to see what other technologies and alternatives are out there.”