From the mat to the ring 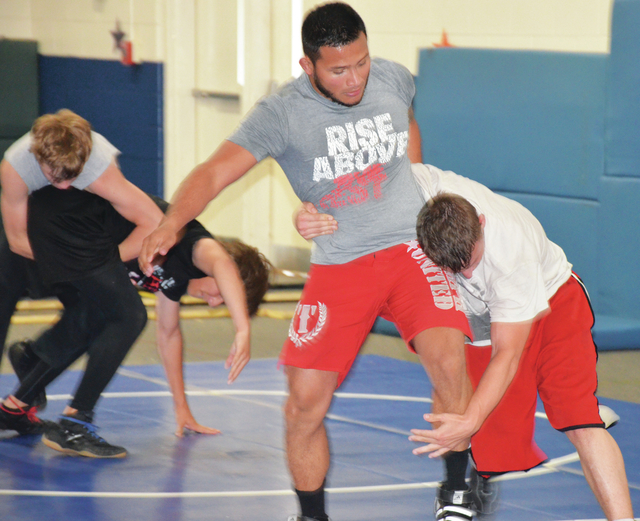 Isaac Figueroa, a former wrestler at LaGrange High, helped out at a local wrestling camp on Wednesday. Figueroa has been a professional mixed martial arts fighter for three years. Kevin Eckleberry | Daily News

He figures it’s not a coincidence.

Isaac Figueroa has become a successful mixed martial arts fighter, and he gives a lot of credit for that to his wrestling background.

Figueroa was a standout wrestler at LaGrange High, where he accumulated a pair of top four finishes at the state meet.

Figueroa, who was serving as a guest instructor at a wrestling camp on Wednesday, said many of the top MMA fighters in the world used to wrestle.

“Of the eight champions, you have six or seven out of the eight who have wrestling backgrounds,” Figueroa said. “They transitioned from wrestling to MMA, and now they’re champions.”

In addition to the advantage it gives competitors as far as getting their opponent on the ground, Figueroa said wrestling “builds character. It’s tough.”

Figueroa was back in the world of wrestling on Wednesday at Unity Elementary School.

LaGrange High coach Scooter Weathers is hosting a wrestling camp this week, and he invited Figueroa to come in Wednesday and work with the wrestlers.

Figueroa, who lived in Florida for a while but has been back in LaGrange since earlier this year, was happy to do it.

He showed the campers some of the wrestling moves that helped him achieve so much success during his high-school days, and he also gave them a taste of what it’s like to be an MMA fighter.

“I taught them some technique that’s really helped me in MMA,” Figueroa said. “I showed them some more MMA-based Jiu-Jitsu stuff, just to let them try it out. They’re all about watching it, and the fighting. They enjoy it.”

The campers put some of what they learned to the test, although Figueroa said with a smile that there was “no punching or kicking today.”

Figueroa had plenty of success as a wrestler at LaGrange with finishes of fourth and third at the state meet.

After high school, Figueroa eventually found his way into the world of mixed martial arts, and after excelling as an amateur, he made his professional debut in 2012.

Figueroa has had a handful of fights since then, and he has won most of them.

It’s been about a year since his most recent fight, but he continues to train hard, and he’s also the one doing the training now.

Figueroa gives a lot of the credit for the success he has had in life, in the world of sports and beyond, to wrestling, which was why he was happy to help out his former coach at the camp.

“That’s part of the season I came out here, was to give back,” Figueroa said. “Any chance I have to give back, I do that. It’s exciting.”

Figueroa said wrestling has “made me tougher, helped my work ethic. It’s helped me no question.”