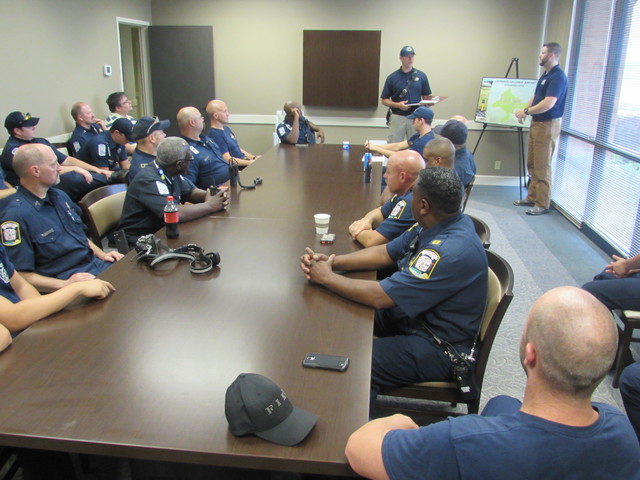 Firefighters with LaGrange and Troup County fire departments wait nearby a mock plane crash Wednesday at the LaGrange-Callaway Airport with equipment and gear, in case the plane catches fire or is leaking a hazardous material, like fuel. First responders worked together to locate the mock plane crash and any victims. Firefighters with LaGrange and Troup County fire departments work together to locate a mock plane crash and any victims Wednesday at the LaGrange-Callaway Airport. The firefighters were also tasked with provided medical services to the victims and getting them to waiting ambulances. Responding agencies debrief after a mock plane crash training exercise Wednesday at the LaGrange-Callaway Airport. The groups discussed the challenges of the crash scenario and ways to complete the tasks more efficiently.

Authorities from around Troup County participated in a simulated plane crash Wednesday morning at LaGrange-Callaway Airport off Lukken Industrial Boulevard.

First responders from LaGrange and Troup County fire departments, LaGrange police, Troup County Sheriff’s deputies, along with American Medical Response paramedics, 911 dispatchers and airport staff worked together in the mock drill to find the crash site and help the “victims.”

Their first task was to locate the plane by using a grid map of the airport layout and runways, plus information from “witnesses” relayed through 911 dispatchers.

LaGrange fire Lt. Caleb Harrison, a special operations and training officer with LFD, said the mock drill was used to test first responders on strategies and tactics in locating the plane, communicating with emergency dispatchers and other responding units. They practiced managing their resources effectively, finding and helping any potential victims, plus reducing any potential danger, such as a fire or leaking fuel.

In Wednesday’s scenario, the plane – actually a Mini Cooper car – crashed off a runway and down in a ravine. Firefighters had to deal with wet, swampy land with tall grass down a steep embankment to get to the crash site and locate three mock victims, one of which was a child. One victim was also ejected from the aircraft and was somewhere in the field.

“Getting to the plane crash was a tough deal,” said Troup fire Lt. Michael Williams, training officer for TCFD. “The terrain was very wet, very high and grassy, thick. There was a creek that we had to cross. It was in a very bad place as far as having to get to a patient.”

“Most of the time, that area is where planes are going to crash, whether they lose an engine or stall on take off, or they shoot the runway short coming in,” explained Harrison. “Much of the airport is swampy or has hilly terrain, and it’s not all flat, so getting to the patients was the second obstacle. Then being that far off the runway, they had to think about how to suppress a fire if one did happen, think about how they would get patients up to flat ground and into EMS units.”

The simulation was similar to a plane crash at LaGrange-Callaway Airport on April 22. The pilot reported an engine malfunction just after take off and crashed down an embankment at the southeast end of one of the runways, said Chad Traylor, director of the LaGrange-Callaway Airport. Traylor and state trooper Jimmy Jones worked together to free the pilot from his plane and get him to safety.

“Any time you have an incident that affects the airport like that did, you want to look at a better scenario for your response vehicles, as well as airport personnel,” explained Traylor. “So what has happened in the past, we do feed off that and learn off of that. Unfortunately, that is how we get some of our training, but that will better prepare us for the future.”

Traylor also said the mock plane crash also enhanced the the county’s abilities to keep in constant communication with all first responders on the scene and work with multiple agencies on a large-scale incident.

“We hope we never have to do this situation together, but eventually it is going to happen,” said Williams, the TCFD training officer. “If you don’t train together a good bit, it becomes each department trying to do their own thing. When you train as one, then it moves smoothly as a smooth operation.”

After the drill, all the crews met to discuss the simulation and how they completed each challenge set before them.

“They all did pretty good,” said Harrison. “They (first responders) staged the units close enough to where they could respond really quick, but far enough away that they were out of the immediate hot zone. They had sufficient personnel to handle everything they were tasked with. They handled it really well.”

All the agencies and airport staff said they plan to work together on more crash simulations soon.

Movies, concerts to kick off