Little named to state board 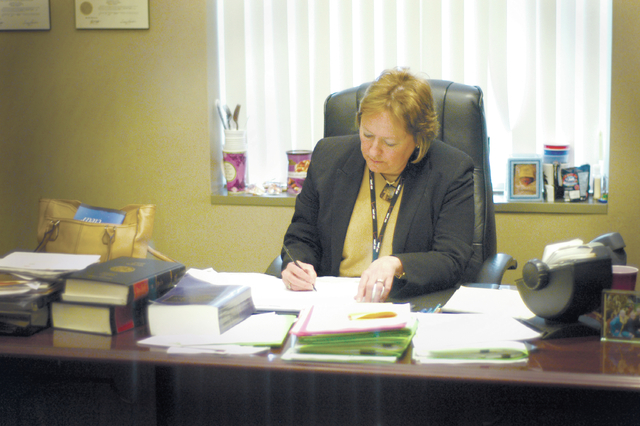 Judge Jeannette L. Little of Troup County State Court works in her office at the Troup County Government Center on Ridley Avenue in November. Georgia’s governor named Little on May 28 to a statewide commission on the prevention of domestic violence.

Gov. Nathan Deal has appointed a local judge to a statewide commission on the prevention of domestic violence.

Judge Jeannette L. Little of Troup County State Court joined the Georgia Commission on Family Violence on May 28, according to a press release from the Georgia Administrative Office of the Courts. Her term will last two years.

“The commission works on all kinds of issues on domestic violence, both legislatively, in public relations and the like,” Little said Wednesday. “They put on a conference once a year that’s a big training conference for anybody dealing with that. (The commission) is a cross section of judges, law enforcement, people who work directly with victims’ services from different perspectives … the whole gamut of people who work with this issue.”

Little, a Troup County native, previously served on the commission from 1996 to 2006, assuming the role of vice chair in 2002.

“I’ve done a whole lot of training in (domestic violence prevention),” Little said. “I’ve been dealing with it for 35 years. I loved it the first time and it’s interesting to see now how much has changed and how much remains the same. We’ve still got a long way to go. It’s still a big problem and we’re still looking for better solutions.”

Little was appointed to the Troup County State Court in 1985 and prior to that appointment, served as chief magistrate and judge of the Small Claims Court. From 1996 to 1997, Little served as president of the Council of State Court Judges and as a member of Judicial Council of Georgia.

The Georgia Commission on Family Violence is a state agency that was created by the Georgia General Assembly in 1992 to develop a comprehensive state plan for ending family violence in Georgia. The commission meets quarterly in Atlanta.

The state ranks ninth in the nation for its rate of men killing women, according to the Centers for Disease Control and Prevention in Atlanta.

Anyone who is the victim of domestic violence, or knows someone who is, can find free, confidential help by calling the commission’s hot line at 800-33-HAVEN. The service is available in English, Spanish and telecommunication options for the deaf.