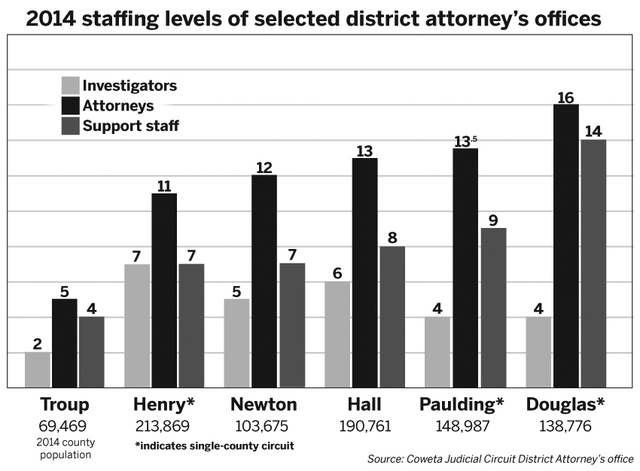 “If you want to talk about crime in Troup County, and what’s happening in our country … it has to do with values and respect,” he said, addressing the LaGrange Rotary Club. “The only way we’ll ever get back to a place where the crime rate is truly low is to instill those values into our children. That’s the only way.”

Skandalakis, the six-term, award-winning district attorney of the Coweta Judicial Circuit, spoke to Rotarians at Highland Country Club, outlining some of his office’s duties, philosophies and challenges.

He’s well aware of the burden of his office and their mission — along with the responsibility it holds. He said discretion and handling prosecutions literally on a case-by-case nature is what sets his office apart from others.

“We can ruin a person’s life in a second by simply having the police go out and arrest somebody and taking them to grand jury,” he said. “But if that is the type of prosecutor you want, then you need to vote me out of office because that is not the type I want to be, nor the type of office I want to have.”

‘Our job is to see that justice is done’

As the district attorney, Skandalakis is an elected official who oversees felony prosecutors in the five-county Coweta Judicial Circuit. He oversees 19 attorneys in Carroll, Coweta, Heard, Meriwether and Troup counties. Those prosecutors, called assistant district attorneys, handle cases ranging in nature from burglaries to murders.

The Coweta Judicial Circuit, along with Skandalakis’ purview, is massive. In 2013, there were 3,259 defendants who went before the circuit’s six superior court judges – only the Gwinnett, Cobb, Stone Mountain and Atlanta circuits, which are each comprised of a single county, saw more defendants. The Coweta circuit ranked fifth in the state in terms of caseload in 2013, the fourth year in a row.

“The prosecutor’s job is not just to convict,” he said. “In fact, in my office we don’t even keep track of the statistics about how many convictions you get … that’s because it doesn’t matter. Our job is to see that justice is done, which means that if a case comes in and you don’t believe that case shouldn’t be prosecuted … because (the defendant has) lead an exemplary life and made a stupid mistake, then the prosecutor ought to have that discretion to give that person a break.”

Guess what 600 pounds does?

He pointed to a case in Newnan a few years ago when students from East Coweta High School broke onto the property of Newnan High School to vandalize a statue as a prank.

“Believe it or not, kids do stupid things,” he said to the laughter of Rotarians.

The students went to Newnan High to remove a massive statue, paint it, and put it in the center of Newnan High’s football field. Their plan didn’t exactly work out, Skandalakis said.

“How they did it, I don’t know, but they managed to get this 600-pound cougar off its pedestal,” he said. “When they put it on the grass on a hill, guess what 600 pounds does?”

The statue slid down the hill and toward the football field and its surrounding track. It tore up the grass and a newly constructed running track, and police charged the students with criminal damage to property.

The parents of the vandals were not happy, to say the least, Skandalakis said. They grounded their kids, took away their privileges and imposed a variety of other consequences.

Up until the vandalizing, the students had done well in school, bringing home good grades and staying out of trouble, Skandalakis said. He had a decision to make: were these the kind of lives his office wanted to ruin?

“The last thing you want is a bunch of felony convictions on a bunch of people who have done a stupid thing but really can turn their lives around,” he said. “We’re not only here to prosecute, we’re here to make sure that justice is served.”

Skandalakis dropped the charges, clearing the way for the students to apply for college and move on with their lives. It’s a decision he stands by, he said.

Making those types of decisions, though, isn’t easy. Skandalakis’ office has one of the smallest staffs in Georgia, per capita to its size.

In 2014, the Coweta Judicial Circuit’s 19 prosecutors handled nearly 5,300 cases – roughly 279 per prosecutor. That’s not to say there were 5,300 individual defendants – some are “return customers,” as Skandalakis calls them. Just up the road, in the Douglas Judicial Circuit – a single-county circuit – 16 attorneys handled 2,190 cases in 2014, according to numbers provided by Skandalakis. That’s an average of 136 cases that year for each of Douglas County’s prosecutors – almost twice the number Skandalakis’ attorneys handled.

And it could get worse, according to numbers from the Georgia Judicial Council.

In 2014, state legislators requested a circuit boundary study from the Georgia Administrative Office of the Courts, which weighed five scenarios for splitting the Coweta Judicial Circuit into smaller circuits.

One scenario recommended splitting the existing circuit into one residual circuit comprised of Coweta and Meriwether counties, and a new Carroll-Heard-Troup circuit. The second most equitable scenario was for Coweta to break away and form a single-county circuit, the study found.

The legislators did not request any further action following the study and the Judicial Council members did not make any formal recommendation regarding restructuring the circuit’s boundaries, but the study did note an expected increase in population in the coming years.

“A growth rate of 13.6 percent in total caseload is expected for the Coweta Circuit through 2020 with Carroll and Coweta counties forecasted to show the largest increase in per-judge caseload,” the study found. “The highest rate of growth belongs to domestic relations filings with criminal and general civil filings contracting.”

The increasing number of cases caused Gov. Nathan Deal to appoint Travis Sakrison, the son-in-law of U.S. Rep. Lynn Westmoreland, after the legislature approved the seventh superior court judge for the circuit. The seven judges float from county to county throughout the calendar year, but each case is assigned to – and can only be heard by – a specific judge.

If a defendant misses a court date, or requests a continuation, the case is held until that judge returns to the county where their defendant’s case is being heard. Sometimes, it may be weeks before the assigned judge returns, Skandalakis said. This results in increased taxpayer burden as defendants who’ve been unable to make or are denied bond await hearings in county jails.

“The longer it takes me to move a case, the more it’s costing the taxpayers money,” Skandalakis said. “If they can’t make bond, (Troup County Sheriff) James Woodruff is sitting there watching them, costing money.”

More to life than just going to prison

There is hope, though, Skandalakis said. He retains his optimistic view of his job and the future.

“We have a problem in Georgia and that is the Georgia Department of Corrections is spending a billion dollars a year to incarcerate people,” he said.

The rise in incarceration costs has pushed Georgia to move to accountability courts, which keep nonviolent offenders from entering Georgia’s prison system and offer treatment and rehabilitation programs.

Those early interventions are important, he said, and law enforcement, along with government officials, should work toward reaching young people before their lives spiral out of control.

“(Street gangs) can recruit from people and kids who feel abandoned,” he said. “We have to reach those kids before they join that street gang, so they can know there’s something more to life than just going to prison.”