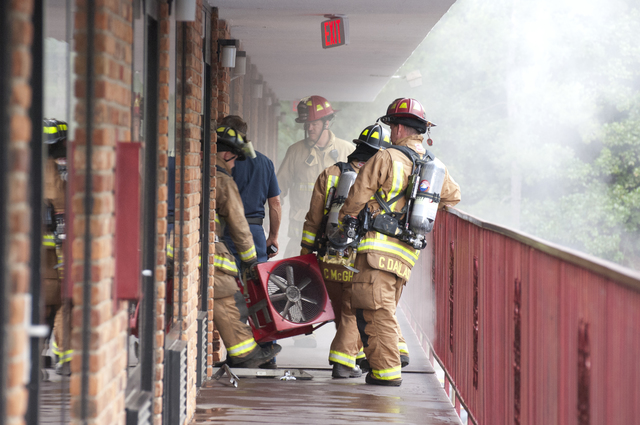 LaGrange firefighters respond to a call at the Super 8 Motel at 29 Patillo Road on Thursday evening. No one was injured in the small fire, according to fire officials.

A fire damaged a motel room Thursday evening off Lafayette Parkway near Interstate 85.

No one was injured.

LaGrange fire and police officials responded to the Super 8 Motel at 29 Patillo Road around 7 p.m. after a clerk there called 911, according to Troup County 911.

Police are investigating the fire as a possible crime, according to LaGrange police detective Jeremy Jones. Police are not offering a potential motive or elaborating on the circumstances surrounding the incident. Jones said releasing further information could undermine the police department’s investigation.

“At this point, the fire’s cause is undetermined,” Jones said. “The location where the fire started is suspicious in nature, because of where it started.”

Jones said he was unable to name an exact location where the fire started due to the ongoing investigation, but said the area of the motel room where the fire began was not conducive to an electrical fire. Sgt. William Nelson of the LaGrange police Criminal Investigation Section told the Daily News this morning that officers collected samples from the area, which have been sent to a crime lab for testing.

Two people were occupying the motel room when the fire broke out, but were not on the scene when firefighters arrived, Jones said. Police had been unable to contact them as of this morning.

The motel’s manager said she was unable to comment on the incident.

Jones said the two occupants were from out of town, but working locally.