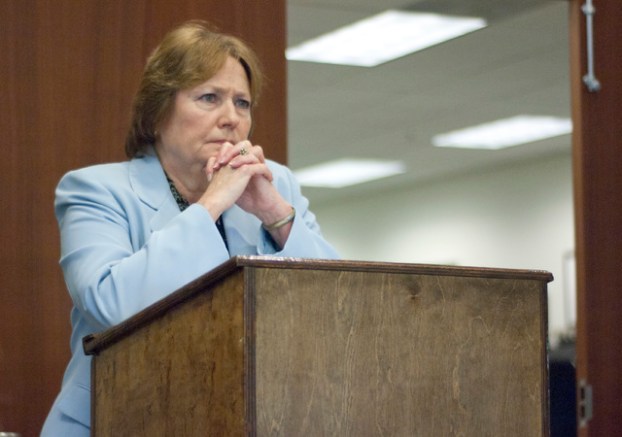 State Court Judge Jeannette Little addresses the Troup County Commission on Friday during a work session at the government center on Ridley Avenue.

A local judge on Friday urged county commissioners to accept a grant to help fund an accountability court, but warned that the county may need alternative funding in coming years.

State Court Judge Jeannette Little addressed commissioners and asked them to accept a nearly $63,000 grant at their regularly scheduled work session at the Troup County Government Center on Ridley Avenue. Commissioners could vote to accept the grant at their meeting Tuesday.

If approved, the grant would be used to fund drug and alcohol testing of clients, provide counseling and pay for personnel costs, according to Scott Smith, the Troup County DUI and Drug Court coordinator.

Commissioners would have to pledge a 10 percent match of the grant, and that money would come from the Drug Abuse Treatment and Education fund, which is generated as a 50 percent surcharge that some offenders have to pay to the county as a part of their court costs.

Additionally, the grant stipulates that the county “must create a sustainability plan to eventually fund the entire coordinator position without state grant funds,” according to the meeting agenda.

The grant has partially funded the court in the past, but Little said commissioners should prepare for it to be cut significantly in coming years.

“I’m pretty sure we can’t get this grant in the future,” Little told commissioners.

The anticipated award amount was initially included in the county’s 2016 budget, but the actual award amount was less than expected. The budget will need to be amended to reflect the exact amount, according to the meeting agenda.

Little said the role of accountability courts in ensuring the safety of Troup County residents is paramount.

“There is no telling what changing one person’s life can do to raise the safety of Troup County,” she said. “I think we run a pretty good court.”

Markette Baker, the county’s solicitor, said the accountability court is an investment worth making.

“I have never been so behind a program,” she said. “This is the way of the future (accountability courts). This is the progressive movement (in justice).”

In other business, commissioners are set Tuesday to review a plan that could pave the way for guest houses on residences in Troup County. Currently the county’s laws prevent homeowners from building a secondary, smaller house on their property.

Additionally, commissioners will consider a measure Tuesday that would allow business owners to reside in the location of their business.

“You mostly see this in urban areas, but we want to support business in Troup County,” said Nancy Seegar of the county’s planning department. “This is a move to loosen some of the regulations.”

Commissioners are also set Tuesday to review a plan that would move some of the inmate right-of-way services to a contract company. Shane Morris, warden of the Troup County Corrections Institute, said the move could save taxpayers nearly $332,000 yearly in county salary, benefits and operational costs.

County Commission will meet in the Troup County Government Center on Ridley Avenue on Tuesday at 9 a.m.

The Confederate Cemetery on Miller Street is set for some sprucing up to make it more of a tourist attraction.... read more