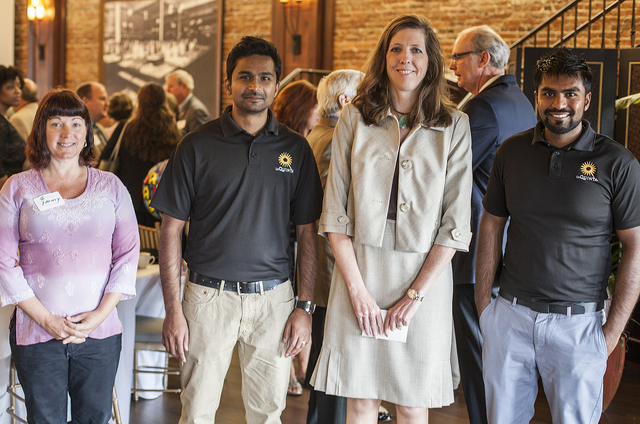 Southwire President and CEO Stu Thorn, center, stands with LaGrange-Troup County Chamber of Commerce board Chairman Libby Willingham and state Rep. Randy Nix at Del’Avant during the chamber’s Early Bird Breakfast on Tuesday. Thorn was the featured speaker at the breakfast. Debbie Burdette, center, holds a Father’s Day gift basket she won Tuesday at Del’Avant during the LaGrange-Troup County Chamber of Commerce Early Bird Breakfast. The gift basket is from Creative Call-Ins, 408 S. Lewis St., and will be given to her husband, Speer Burdette, left. With them is chamber board Chairman Libby Willingham. Officials at LaQuinta Inn and Suites attend the LaGrange-Troup County Chamber of Commerce Early Bird Breakfast at Del’Avant on Tuesday. The hotel at 111 Hoffman Drive sponsored coffee for the event. Shown are, from left, Tammy Malloy and General Manager Jignesh Patel, chamber board Chairman Libby Willingham and Neal Patel.

During the past 14 years, Southwire President and CEO Stu Thorn has seen the cable and wire manufacturer flourish from annual revenues of $1 billion to $5 billion, but that’s not what he’s most excited about.

Founded in 1950 in Carrollton and recently celebrating its 65th anniversary, Southwire has become the largest manufacturer of cable and wire in North America. The company has globalized itself to South America and Canada, produces enough products to supply cable and wire to one in every three homes in the United States, and has diversified itself enough to carry the company and its workforce far into the future.

But what excites Thorn the most is how the community and Southwire’s employees have rallied around the company’s core tenets to not only make money, but to share their values to benefit others.

“The real secret behind Southwire’s success is our people, so we want to make sure we treat our people in a way where they can be valued, where we promote diversity, where they’re healthy, they’re safe, they’re having fun, they’re feeling like they’re being developed,” Thorn said during the LaGrange-Troup County Chamber of Commerce’s Early Bird Breakfast on Tuesday. “Our goal is to maintain our success not just into the next quarter but into the next generation.”

Southwire bases its success on five specific principles: building worth, growing green, living well, giving back and doing right. Those shared values are demonstrated by attempting to make zero waste disposal a reality by 2017 or having employees volunteer in civic and charity organizations across the area.

Southwire’s continued diversification satisfies its overall vision of meeting the needs of today’s generations while supplying the growth for future generations. The company has grown from solar panels to electricians’ tools to mining operations, but it has seen an even greater amount of growth in its educational partnerships.

Through a hefty donation, Southwire created the Southwire Sustainable Business Honors Program through the University of West Georgia’s Richards College of Business, allowing talented students to graduate with a bachelor’s and an MBA in four years.

The Southwire Engineering Academy at Carrollton High School allows 20 students a year the chance to take on real engineering problems found at Southwire, find a solution and provide it to the company’s administration, sometimes saving millions of dollars annually, Thorn said.

While all of these programs have seen great results, it’s Southwire’s 12 for Life program that truly embodies the company’s philosophy of applying their talent as well as their money to generate a multiplier effect.

“You’re not allowed in this program if you’re doing well in high school. You have to be struggling. You have to have bad grades, bad attendance – you have to be really unlikely to make it through,” Thorn said.

The 12 for Life program is a joint partnership with Carroll County Schools that allows at risk students to spend half of their day taking classes and half of the day working for pay at a specialized factory facility purchased and outfitted by Southwire. The students produce real products used by the company while earning an above average wage and credits toward their diploma.

Some of these students are incredibly at risk of dropping out. A recent valedictorian of the program was abandoned by her parents at the age of 12, Thorn said. Others have had parents pass away abruptly and had to work to pay bills, and many are parents themselves.

“We’re growing. If we’re going to grow, we have to have people to work in our facilities as we grow. We have to be able to hire more people, and the rule is you can only work for Southwire if you have a high school diploma,” he said. “By helping those kids who otherwise wouldn’t graduate from high school, we end up creating a bigger workforce to draw from and that allows us to grow and sustain our success into the next generation.”

“Everybody is finding shared value through this in a very significant way,” Thorn said.

Since the program began seven years ago, it has graduated more than 1,100 students from Carroll County and other Southwire facilities across the country. It’s done so well, Thorn and his staff were asked to create a nonprofit group that could promote the program across the state, he said. The Great Promise Partnership allows different businesses to join in the program, which currently has about 15 businesses partnering together.

“You don’t have to be big to do this. You can do it on a small scale. You can just bring in a few kids; have them work in an office environment. The key is that it’s during school, they’re being paid, they’re getting educated while they’re being supported.

“The biggest key of all is that you focus on the kids who are about to drop out. The real key is to make sure when you partner with the school system, you partner in a way where you’re getting the kids who really need the help.”