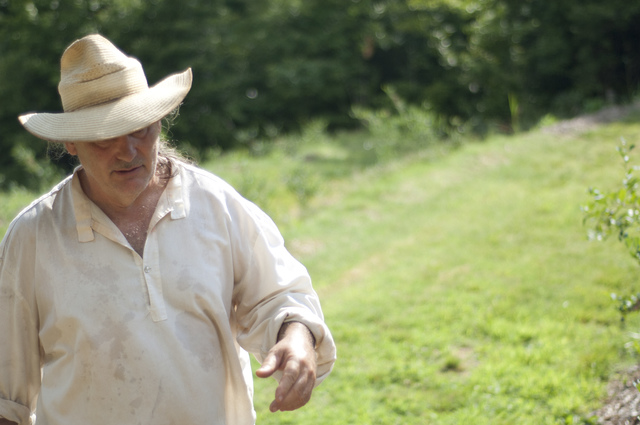 Doug Roberts, an organic farmer in West Point, admires one of his blackberries at his farm Wednesday. Berries wait to be picked at Rabbit Eye Farm on Wednesday in West Point. Doug Roberts, an organic farmer in West Point, inspects his crops Wednesday at his farm. Doug Roberts, an organic farmer in West Point, inspects his crops Wednesday at his farm.

The shadow of one of the most modern industrial facilities in the state, the Kia plant in West Point, a local farmer is showcasing plants of his own using techniques of a bygone era.

Doug Roberts, owner of Rabbit Eye Farms at 279 Gray Hill School Road in West Point, is an organic farmer who grows varieties of berries and invites the public to pick their own.

“I’ve been studying all of these things and my research says that we should be the next Napa Valley,” he said Wednesday at his farm. “We have such good resources in this narrow band of latitude, and we have the water, the relatively cheap energy and lots of sunlight. We have it just right, and we can grow year-round.”

Under the hot Georgia sun, Roberts curates his plants, pulling weeds from the ground and occasionally pulling a thumb-sized blackberry from the plants and popping it in his mouth.

“They’re really good,” he said. “The blackberries are much better than I expected, I’m blown away at the success.”

He’s grown all types of fruits in vegetables in the past, he said.

“About 12 years ago, I grew tomatoes indoors for an organic greenhouse,” he said. “They were some of the best tasting tomatoes I’d ever had. I had a pretty good following here in LaGrange; I was known as the tomato man.”

This year, though, Roberts has turned his eye on a Southern favorite.

“Right now we’re specializing in berries,” he said. “Blackberries, blueberries, raspberries. I used to grow strawberries, but I got tired of crawling on my hands and knees to pick them, so I want to grow them vertically next year.”

You’d never know it by the size of his berries, but Roberts has used absolutely no fertilizer, he said. Everything is grown completely organically.

“I firmly believe you can get the same yeilds or close to it with the organic ways,” he said. “I’m a lot healthier as I grow more and more of my own food.”

To grow his berry patch, Roberts turned to a unique method of preparing his land for planting.

“All of this land was just trees,” he said. “I had a back hoe operator pluck the trees out, shake the dirt off and throw them in a pile. Then we terraced our slopes so that the slope goes up the hill and into a 3-foot ditch, so the rain goes back to the berries instead of going down the hill. I put all those trees in that 3-foot ditch.

“So, it’s taking 30 years of growth from those trees, which drew all the trace minerals out of the soil so that they can give them back,” he continued. “The trees are feeding the plants the nutrients, and they also hold water like a sponge.”

Roberts is a solid believer in his soil.

“This area was the breadbasket of the Confederacy before they stripped our soil with cotton,” he said. “We can grow the soil back.

“This, here,” he said, pointing to the ground beneath his feet, “is grow-nothing Georgia red clay, and look what’s springing out of it. Soil is a renewable resources, and we need to be doing that right here in Troup County.”

He’s got big plans for his farmland, too, he said. He owns 90 acres in southern Troup County and plans to expand his farm in the future.

“Eventually, I want to be the Gray Hill School Farm,” he said. “My whole goal, or my ministry, is to start that right here on Rabbit Eye Farm. I’m looking more and more into what grows here, the easiest way to grow it, and the easiest way to do it so that when I’m 80 years old, I can still farm.”

Educating the public in sustainable farming is a passion of Roberts’, as well.

“I would like to make farming more available to people,” he said. “If someone’s barrier is land and equipment, I have land and tractor, but we need people who have good ideas. I’d love to reach out to folks, anyone who is interested, I’d be more than happy to talk to them about it. I want to teach people right here where we live how to grow things easier, more sustainably.”

To grow his connections with the community, Roberts is opening his farm up to the public in the coming weeks and selling his berries. The farm is will be open for people to come and pick their own berries Tuesday and Friday from 4 p.m. to 7 p.m. and again on June 26 from 4 to 7 p.m.

He’ll have live music at the farm Friday, and invites anyone with an instrument to bring it along and jam with other musicians. Anyone who comes and plays will get a free pint-sized cup of berries.

When Roberts started his farm three years ago, he thought he’d be know for the blueberries he grows.

“The Rabbit Eye Blueberry is what most people grow in the South,” he said. “So we named (the farm) that because we thought the blueberries were going to be the big ticket, but the blackberries turned out phenominal. Maybe I’ll be known for my blackberries rather than my blueberries.”