New transitional center in the works for Emmaus Shelter in LaGrange 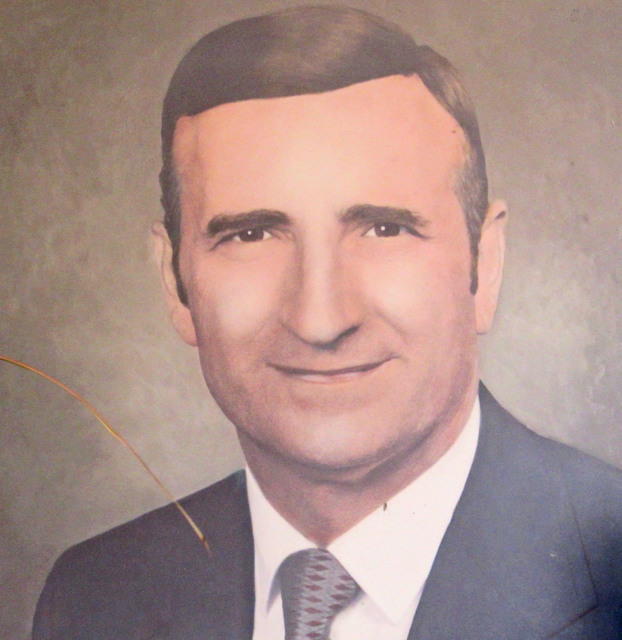 Jimmy Matthews, owner of the Matthews Building on Hill Street, stands in front of the building, which he is gifting the building to Emmaus Shelter to use as a transitional center for men. He said he still plans on having an office inside the building and will help the Emmaus Center get settled in its new home. The Matthews Building, built in 1915, sits on Hill Street at intersection known as Three Points. Jimmy Matthews said before his father purchased it in the late 1940s, the building housed a radio station and part of it was used as a dance hall. Matthews is gifting the building to the Emmaus Shelter, who will use it for a men’s transitional center. A painting shows J. Ralph Matthews, who bought in the 1940s what is now the Matthews Building on Hill Street.

For more than six decades, a small stretch of sidewalk in the intersection of Horace King, East Bacon and Hill streets has been the hub of a local community within LaGrange, known as Three Points.

Mixed among a scattering of small, mostly family-owned stores, service shops and art studios is the large, imposing white brick Matthews Building that has been home to many businesses – but whose name has always remained the same.

The building was constructed in 1915 and bought by J. Ralph Matthews in the late 1940s. In less than a month his son, Jimmy, will turn over the keys to someone who doesn’t share the family name, but who he said embodies the same characteristics the Matthews family hopes to carry on in the community.

Matthews is gifting the building to Jessica David, executive director of the Emmaus Shelter, which is a local center that gives homeless folks a place to call home while helping them get back on track, find jobs, reunite with loved ones and much more.

“We prayed for a hero – and God sent Jimmy Matthews,” David said. “We strongly believe this was the work of the Holy Spirit to bring us together … what a gift, to hand over your family’s legacy. It’s a miracle of outstanding proportion.”

Matthews added: “My dad always had a passion for helping people who couldn’t help themselves. I am very pleased. This is something dad would have wanted. He had a passion to help and give back to the community.

“I appreciate Jessica and Emmaus. It will help folks have a place to lay their heads at night.”

Matthews said his dad had that same vision for the upstairs portion of the Matthews Building, which had been converted into 10 separate bedrooms. He rented those out by the week, starting in the 1940s for $7 per week. Now, the rooms go for $140 a week, but still give folks shelter who may have nowhere else to go.

In the ‘40s, Ralph Matthews turned part of the downstairs area into the Three Points Sandwich Shop, Jimmy Matthews said. Through the years, the bottom half of the building became a laundromat, beauty shop, furniture store, a reality office, loan business, a bail bond business and a pawn shop.

Jimmy Matthews and his dad worked side by side for 50 years, although he said that was not the plan in the beginning.

“I came by to see what I wanted to do. I had just graduated from LaGrange College with a BA in speech and drama,” he explained. “He started me out to go around and collect rent and loan payments. Then I worked as a bail bondsman and I found something that I liked to do.”

Both father and son also shared a passion for giving back to their community – they were both presidents of the Optimist Club and the Georgia Industrial Loan Association, members of the Moose and Elks lodges, and leaders within their church. Jimmy said Ralph also was active in the legislature talking to lobbyists and an active staff member for several Georgia governors.

J. Ralph Matthews passed away in 2004 from Parkinson’s disease. He was 87 years old.

Jimmy Matthews maintained the family businesses and continued to follow in his dad’s footsteps by helping the community through organizations like the American Red Cross, Jaycees, American Cancer Society, Shriners and more.

After more than 10 years, with only a few of the businesses still operating, Jimmy said he knows it is time to pass the torch to someone else. With no “heir” to the building, he said he feels comfortable gifting it to the Emmaus Shelter, who will use the rooms upstairs and part of the downstairs area as a men’s transitional center.

“We are embracing the opportunity to preserve the Matthews family legacy of contributing to the community,” said David. “We will use the building to be a blessing to the Three Points area.

“We’re going to refurbishing upstairs as a rooming house for man and using it in an appropriate way. We have future visions of using the downstairs area as a coffee and ice cream shop. Another part we want to use as an expansion for the Emma’s Attic consignment shop. We want to be good neighbors to the businesses and homes around us.”

Added Matthews: “My dad wouldn’t have wanted to see this building sold … I want something that would carry on his legacy … This will still give back to the community. Helping people who can’t help themselves and getting them on the right track. I feel good … you see it more and more – you’re not promised the next minute. So I am content and happy to still be here and see it thrive in another area.”

Matthews said eventually he will also give the Emmaus Shelter the property across the street from the building – with the promise they turn it into a park.

He admitted the sentimental value of the building is making it hard for him to let go.

“I have a lot of great memories here,” Matthews said. “Not a day goes by that I don’t feel my dad’s presence in this building … He was the backbone of all this … this is his long hours, work and passion. It’s bittersweet … but when we do the final paperwork, I won’t walk out and say goodbye. I’ll help Jessica get the center up and running.”

He plans to keep his office, which was also his dad’s, and part of the front lobby for a little while.

Matthews and David said they are still fine tuning the legal documents, but both hope to sign the paper work within the month.

David is hoping local churches will partner with the Emmaus Shelter to refurbish, furnish and pray over each room in the Matthews Building before the organization officially moves in.