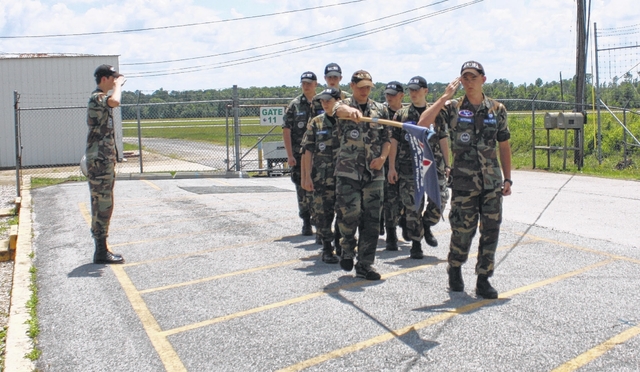 Maj. John Burgess stands next to a plane at LaGrange-Callaway Airport during the West Georgia Composite Squadron of Civil Air Patrol’s Basic Cadet Training weekend. Burgess was cadet orientation pilot for the group. Cadets awaken from tents at LaGrange-Callaway Airport near the West Georgia Composite Squadron base on Aerotraon parkway to begin training for Basic Cadet Training weekend. An early morning fog hovered over the ground as Lt. Daniel Barr and his staff woke cadets early to begin their long Basic Cadet Training weekend May 29.

The weekend, May 29 to 31, is a school geared towards new CAP cadets. It teaches basic skills of the cadet program and focuses on the fundamentals of teamwork, drill and ceremonies, wear of the CAP uniform and basic customs and courtesies, said Laurence Rose, captain of the West Georgia Composite Squadron based in LaGrange.

During training, staff and cadets conducted physical fitness – stretching, calisthenics, team sports and an obstacle course that was fun, but still physically challenging.

Teamwork building teaches cadets how to work together with friends they have only known for a very short time, Rose said. It involves quick thinking, reacting to change and a willingness to trust team members to make good decisions.

The number one reason cadets join Civil Air Patrol is to fly, Rose said. To motivate them to achieve in the cadet program, cadets are flown regularly. During the weekend Maj. John Burgess flew several of the cadet for their first orientation flight.

CAP has been performing missions for America for 73 years. It is a major partner with Wreaths Across America, an initiative to remember, honor and teach about the sacrifices of U.S. Military veterans, Rose said.

The West Georgia Composite Squadron is the LaGrange chapter of Civil Air Patrol. It meets Tuesdays at 6 p.m. at the end of Aerotron Parkway in LaGrange. Civil Air Patrol is a nonprofit organization dedicated to three missions: cadet programs, emergency services and aerospace education. More information is available at www.ga153.com.