Carrying on the tradition 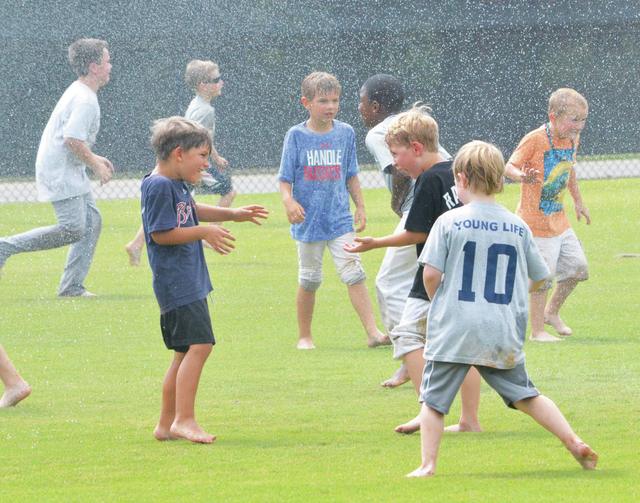 At the close of Thursday’s camp session, the campers got some time to play in the sprinklers. Kevin Eckleberry | Daily News

It brings back memories.

When David Kelton was growing up, he often went to a LaGrange College baseball camp put on by then head coach Phil Williamson.

Now, Kelton is still involved in the camp, although his role has changed in a big way.

Kelton recently completed his second season as the Panthers’ head coach, and for the past few summers, he has been running a baseball camp at Cleaveland Field at Williamson Stadium, home of the Panthers.

Kelton is carrying on the tradition began by Williamson, who was the first coach when the program got started in 1984.

Before becoming the Panthers’ head coach, Kelton helped out at the camp when he was an assistant to previous head coach Kevin Howard.

Kelton took over as the Panthers’ head coach when Howard left following the 2013 season to become the coach at Reinhardt.

Kelton said the participation level was great both weeks.

“I just hope that every year we keep getting the draw,” Kelton said.

Kelton is hoping that by the time next summer’s camp rolls around he’ll be coming off a winning season.

The Panthers haven’t had a winning season since 2010 when they won a conference championship and made it to the NCAA Division III national tournament.

The Panthers lost five seniors, including former Troup Tiger Jim Reed and former Callaway Cavalier Chris Laye, but most of the key players will be returning.

“It’s Year 3, so this should be the year we really get it going,” Kelton said.

In addition to the many returning players, many of whom were freshmen during Kelton’s first season as head coach, a strong freshman class will be coming in, and some of those players will be pushing for playing time.

“This is a real good class we have coming in, so we’re excited,” Kelton said.

The 2015 Panthers will face a challenging schedule, and that’s nothing new.

In addition to the tough teams the Panthers will play in the USA South, they’ll also have a grind when it comes to the teams they’ll face out of conference.

“Our non-conference schedule has to be one of the toughest ones out there,” Kelton said. “Emory, back-to-back making it to the College World Series. Birmingham-Southern was one game away from making it to the World Series. Berry College, they’re always good. And Oglethorpe, Dan (Giordano) has figured out recruiting up there. They took tremendous steps forward. It’s a tough schedule, but it’s a good schedule.”

While the future appears bright with so many gifted players returning, Laye and Reed will be missed.

Reed, a third baseman, played four seasons with the Panthers, and he saved his best season for last.

Reed, the leadoff hitter for much of the season, was third among the every-day players with a .307 batting average and second with a .407 on-base percentage, and he drove in 18 runs and stole 10 bases.

Laye, who spent two seasons with the Panthers after transferring from Chattahoochee Valley Community College, also had a big senior season.