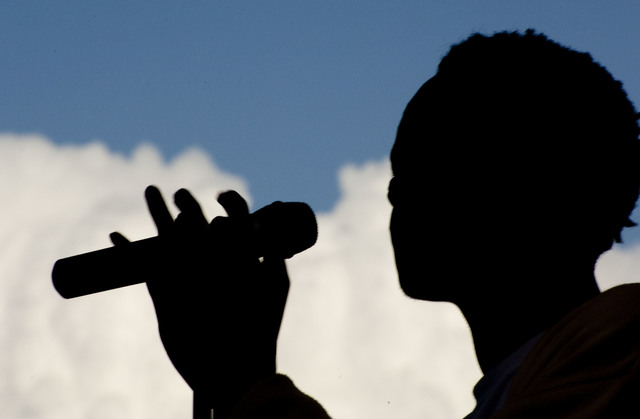 Devin Bolen of the LaGrange band Gullah performs Friday evening at the Battle of the Bands contest in downtown LaGrange. Joey Brand, from left, Joe Debrow and Barry Waldrep judge the 2015 Battle of the Bands contest Friday in downtown LaGrange. Amy Ware, from left, Chhana Lowe and Emily Wright take a selfie Friday during the 2015 Battle of the Bands contest in downtown LaGrange. Singer Malcolm Stephen is silhouetted against the sky as he performs Friday during the 2015 Battle of the Bands contest in downtown LaGrange.

The sounds of rock ‘n’ roll filled downtown LaGrange on Friday evening during the annual Battle of the Bands contest.

“We didn’t know what we were getting ourselves into,” said Sweetbay vocalist Lance Mapp. “We just like to play music, but this is really exciting and kind of unexpected. We want to thank LaGrange for having us here.”

The event, organized by the Downtown LaGrange Development Authority, drew a crowd of hundreds, and weather cooperated just long enough for headline local band and last year’s winner Trashionality to take the stage before rain began around 9:30 p.m.

Pat Thompson, a grandmother of one of the contestant band’s members, said she came to the battle to support her grandson and enjoy the music.

“I support them 100 percent,” she said. “I’m not crazy about their music — I’m a little old to be hanging on to their music — but he (my grandson) is the highlight of my life. I think this is great.”

Four bands competed in the battle: Steroid Summer, Gossamer, Gullah – all of LaGrange, and Newnan-based Sweetbay.

Joey Brand, Joe Debrow and Berry Waldrep judged the competition and were invited because of their experience in professional music performing and recording.

Each band was allotted 20 minutes to perform, and was required to stay on stage for at least 10 minutes.

The turnout was a boon to downtown businesses as patrons filled restaurants and retail shops.

Children filled the area in front of the stage, dancing with each other and parents as adults relaxed in chairs in the shut-down Bull Street.

The city cordoned off the area, creating a special events zone, which under the city’s ordinance temporarily relaxed restrictions on alcohol and allowed patrons to take beverages outdoors to listen to the bands. LaGrange police provided security for the event, and ensured patrons who chose to purchase alcohol stayed in a designated area.

Sweetbay will return to the Battle of the Band’s stage in 2016 to introduce next year’s winner.

For more information about upcoming events in downtown LaGrange, visit the DLDA online at www.downtownlagrange.com.