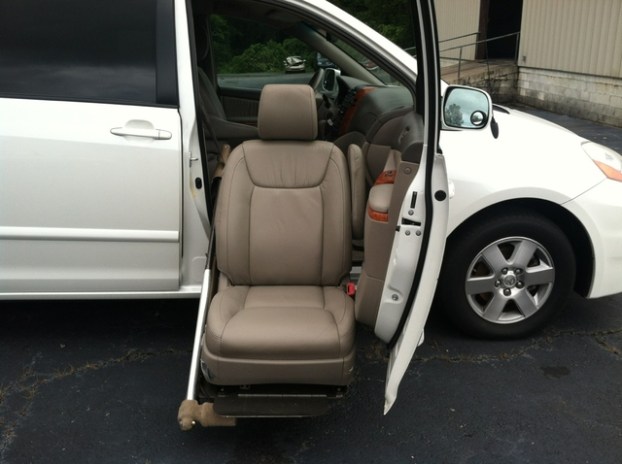 Local performances artists are joining together June 27 for a benefit show to help local photographer George Czarnonycz, who has multiple sclerosis, purchase this handicap-accessible van from LaGrange Toyota, which is offering it at cost.

Several performance artists in LaGrange are slated to come together June 27, to lend a helping hand to one of their own.

Musicians, dancers, actors and storytellers are joining together to hold a benefit show for long-time Lafayette Society for Performing Arts’ photographer George Czarnonycz, who suffers from multiple sclerosis.

Proceeds from the show, titled “Photographs and Memories,” will go toward helping Czarnonycz’s family purchase a handicap-accessible van, which the show’s promoters say he needs to make it to doctors and therapy appointments. Presently, Czarnonycz has no transportation available to him, according to an LSPA press release.

A suitable van currently is available for purchase at LaGrange Toyota, which the company is offering to sell it at cost.

Carol Cain, a local storyteller and active participant in the LSPA, said the van’s arrival at the dealership sparked an interest from some of LSPA’s performers and set the wheels of the benefit show in motion.

Two of the performers, “Jeff Sargent and Jim Hunt, both work at LaGrange Toyota and it was just absolute dumb luck, divine intervention, whatever you want to call it, that this van showed up at LaGrange Toyota,” Cain said. “It’s a perfect fit for George. The passenger seat comes out and drops down. These guys saw it, and thought, this is what George needs, now let’s help him get it.”

Czarnonycz, who was diagnosed with MS in 1990 at age 30, has photographed LSPA shows and other performances in the region for more than 10 years. His photographs adorn the hallways of the LSPA’s Bull Street building and Cain called his work a staple of the community.

“Most recently, the last show he photographed for me was ‘The Miracle Worker,’ back in February,” she said. “He caught this wonderful moment when Helen Keller is spitting grits into Annie Sullivan’s face. There’s this spray of grits just raining down on her, and he was waiting for those moments.”

Catching those moments is something Czarnonycz is known for, Cain said.

“George would come for probably two dress rehearsals,” she said. “The first day, he’d just watch and sort of mock up some shots. Then the second day he’d come and do his serious work. I’ve got to tell you, he has the most incredible gift of capturing those marvelous moments on film. Most people would miss those moments.”

The benefit will show scenes from the play “Lovers and Other Strangers,” performed by Jim Hunt and Melissa Stanley. The LSPA’s ballet company will perform, along with local Americana band Regeneration.

Students from Troup and Harris County high schools will perform songs from their spring musicals and Cain will tell a new story, she said. Robin Treadwell will play saxophone and Jeff Sargent and Anna Howington will perform musical solos. Other performances may be added.

The event will also feature a slideshow of some of Czarnonycz’s photographs.

Law enforcement agencies from around Troup County participated in a simulated plane crash Wednesday morning at the LaGrange-Callaway Airport off... read more