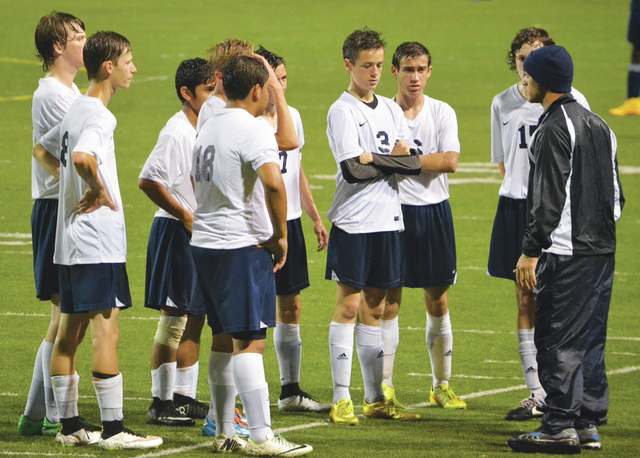 Troup’s soccer team huddles during a game this spring. Troup, along with Callaway, LaGrange High and LaGrange Academy, will participate in a seven-on-seven soccer league this summer. Kevin Eckleberry | Daily News

They’re ready to play some soccer.

The teams will get together and play once a week through July 21, and on July 25 they’ll participate in a knockout round leading up to a championship game at 1 p.m.

There will be seven players on each team including the goal keeper, and two games will go on at the same time.

Callaway, LaGrange, Troup and LaGrange Academy will each field two teams, and there will be a total of eight games today, with the first games kicking off at 6:30 p.m.

All of the games will be played at Callaway High’s soccer facility.

“They’re all at our place,” Callaway soccer coach Jake Hembree said. “What we’ve done is we’ve taken our field, and we’ve turned it sideways, so we have two 60 by 40 fields. So we’ll be able to play two matches at a time, side-by-side.”

Callaway, LaGrange and Troup all played each other during the regular season.

LaGrange won the county championship after beating Troup and then edging Callaway 1-0 in overtime.

Troup beat Callaway and lost to LaGrange, and Callaway was winless against its two county foes, although both games were tight.

LaGrange and Callaway both ended up losing in the first round of the state tournament last season, while Troup came up just short of making it to state.

Hembree was glad to get LaGrange Academy involved in the league as well.

LaGrange Academy brings a lot to the table.

The Warriors, who play during the fall instead of the spring when the public schools play, advanced to the state-championship game in their league last fall.

“I’ve always wanted to play them, and they’re different seasons from us, so it’s hard to get them in,” Hembree said. “So that’ll be a way to do it during the summer.”