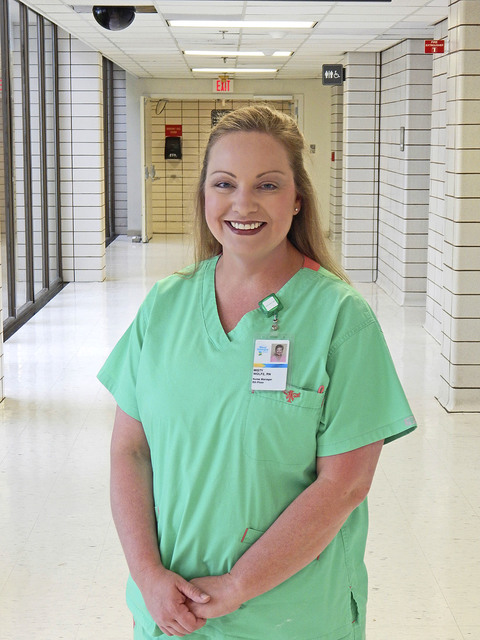 WGH honors Nurse of the Year Misty Wolfe, RN, has been honored as West Georgia Health’s 2015 Nurse of the Year.

Wolfe has served as nurse manager for the fifth floor since 2008 after transitioning from the role of nursing assistant to LPN to RN. In their nominations, her fellow nurses said she is a tireless patient advocate who holds high standards for her unit by being fair, compassionate and professional.

As one nurse said in the anonymous nomination process by West Georgia Health staff members, “She’s my rock on this floor.”

“Our unit shines as one that is highly motivated, structured and disciplined,” said Tonia Presley, RN, a fifth-floor nurse. “Misty always puts our patient population first, in any endeavor that she pursues. Whether it be listening to her staff voice their concerns over a patient safety issue or actively advocating for her staff, she willingly puts herself on the line for others.

Another fellow nurse said Wolfe is “a great nursing leader and truly cares about her patients and their families. She is committed to quality and safety and always helps in any way possible. The high standard she sets for herself is reflected in her advocacy for patients.”

Law enforcement agencies from around Troup County participated in a simulated plane crash Wednesday morning at the LaGrange-Callaway Airport off... read more