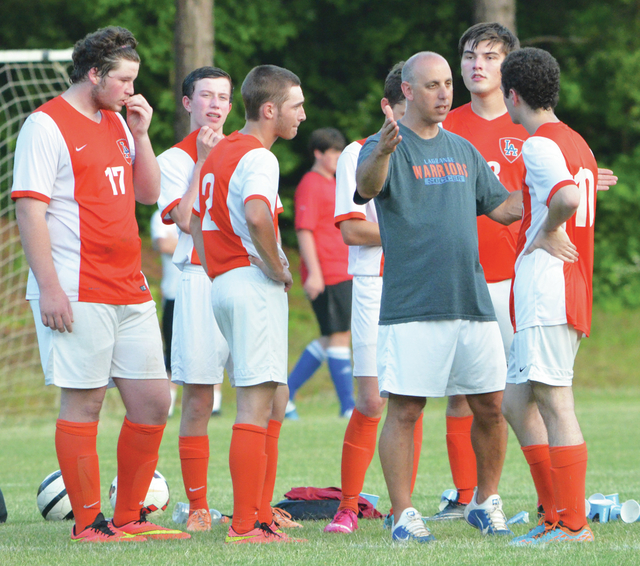 Mike Petite’s LaGrange Academy Warriors will use the seven-on-seven league as a springboard into the fall season. Kevin Eckleberry | Daily News

The timing couldn’t be any better.

There are five teams participating in a seven-on-seven soccer league that kicked off on Monday at Callaway High.

Of those five teams, only one of them has a season coming up this fall.

LaGrange High, Callaway, Troup and Lafayette Christian School all have their seasons during the spring.

The one exception is LaGrange Academy, which will get its season under way in a few months.

The Warriors will use the summer league, which runs through July 25, as a way to prepare for the upcoming season.

“It’s perfect timing for us, because we’ll play all summer, and then that leads into our season,” LaGrange Academy coach Mike Petite said. “For these other guys, they’ve played their season and have already wrapped it up, and they have to wait a while.”

The Warriors, who play in the Georgia Independent Christian Athletic Association, are hoping to duplicate the tremendous success they had a year ago.

Last fall, the Warriors advanced all the way to the state-championship game before falling to Trinity Christian.

If the Warriors are going to have another memorable season, they’ll have to do with a relatively new cast of characters.

Four players from that team graduated, and three others won’t be returning to the team.

“We’re losing seven, and that’s a lot,” Petite said. “Those were seven kids that started or played heavy minutes for us.”

Petite added that “we’ve got a good group coming back, and I feel real good about that group. But, we’ll see. It’s a work in progress. We’ll figure it out.”

As for this summer’s league, Petite said it works out great for his team.

“It’s perfect,” Petite said on Monday between games. “Basically I’ve got all my returners are out there. A couple of them aren’t here tonight, but they’ll all be able to come out. It gives us a good chance to kind of see what we can do, and do some different things in a pretty competitive environment. So that’s good.”