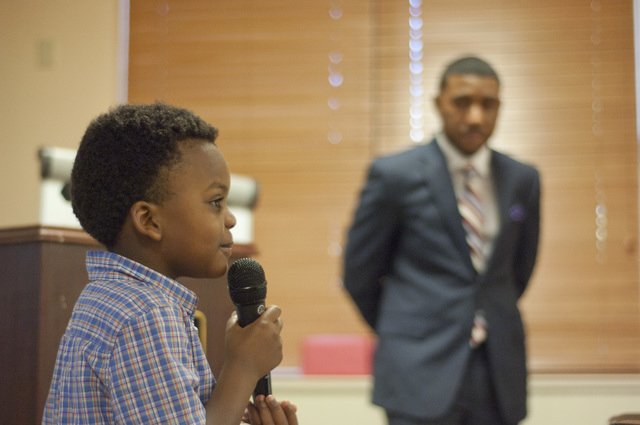 Attendees address a forum on the importance of fatherhood on Saturday at the Benjamin Hill Apartment Homes on Whitesville Road. Lonnie Thornton Jr., standing, left, was master of ceremonies for the event, which was hosted by West Georgia STAR, the nonprofit arm of the LaGrange Housing Authority. LaGrange police officer Johnny Byrd speaks on the “when he became a man,” Saturday at a forum on the importance of fatherhood on Saturday at the Benjamin Hill Apartment Homes on Whitesville Road. The event was hosted by West Georgia STAR, the nonprofit arm of the LaGrange Housing Authority. LaShawn Beasley of LaGrange speaks about fatherhood during a forum Saturday at the Benjamin Hill Apartment Homes on Whitesville Road. The event was hosted by West Georgia STAR, the nonprofit arm of the LaGrange Housing Authority. Xaden Clark, son of Courtney Clark of LaGrange, speaks at a forum on the importance of fatherhood Saturday at the Benjamin Hill Apartment Homes on Whitesville Road. The event was hosted by West Georgia STAR, the nonprofit arm of the LaGrange Housing Authority.

A local nonprofit held a forum on the importance of involved fatherhood Saturday at the Benjamin Hill Apartment Homes on Whitesville Road.

“I just wanted to speak a little bit on the role of a man and my experience growing up without a father in my life, being raised by a single mother,” said speaker Jacob Tucker, who works with West Georgia STAR.

“Being a black male myself, I feel like it makes it tougher to reach the qualities it takes to be called a man,” Tucker told the crowd. “I grew up, for most of my life without a father … I always thought to myself, ‘what did I do to make him not love me, make him not care about somebody who he had a part in creating? What did I have to do make him want to be there for me, to come to my football games and my graduations?’”

Tucker said it wasn’t until he grew older that he learned he didn’t do anything wrong, but rather it was his father who was slighted.

“Now, I realize he’s the one that’s missing out on this joyride,” Tucker said. “I see that God put me in this situation to make me a stronger man and be the person that my father wasn’t.”

While Tucker spoke about the challenges of growing up without is dad, others talked about their experiences growing into fatherhood and the challenges that went along with it. Lonnie Thornton Jr., a youth outreach coordinator with West Georgia STAR and a local 5th grade teacher, acted as master of ceremonies during the forum asked several attendees when they knew they had reached manhood.

“I can tell you the exact year that I became a man,” answered attendee and LaGrange police officer Johnny Byrd. “It was 1986, that was the year that my daughter was born. I was going to Fort Valley State at the time, and (my parents) told me, ‘don’t worry, we will take care of her.’ After about a month of her living there, I realized it was not their responsibility, it was my responsibility. So at that time, I left school and paid my own bills and took care of my child myself because that was my responsibility as a parent. That’s when I realized I’d become a man.”

Being a father isn’t just about paying bills and being a man, though, said attendee Dialleo Burks, head varsity football coach at LaGrange High School. It’s also about having the right attitude.

“We have to stay positive because sometimes things are going to go wrong,” Burks said. “Kids are not perfect, so you have to make sure you provide input from positive males and other people in the family.”

Troup County Sheriff James Woodruff also spoke at the event, and said only cooperation between the community, the clergy, law enforcement and neighbors be the positive influence young people need.

“Young people are going to follow something,” the sheriff said. “It’s either good or it’s bad, but they’re going to follow something. Our young people are our future, our next generation that’s coming along. If we don’t train them right, if we don’t show them the right direction, then where is LaGrange and Troup County and the state of Georgia going to be?”

Speaking about juvenile delinquency, Woodruff said, “there’s no easy answer. We didn’t get here overnight and we won’t get out of here overnight. But it starts with one person doing one thing at a time to move us forward.”

“We want people to feel good about their community here (in the housing authority),” Heard said.

For more information or resources about responsible fatherhood, visit www.fatherhood.gov. The website includes tips for parents, suggested family activities and other information.