Getting their kicks in 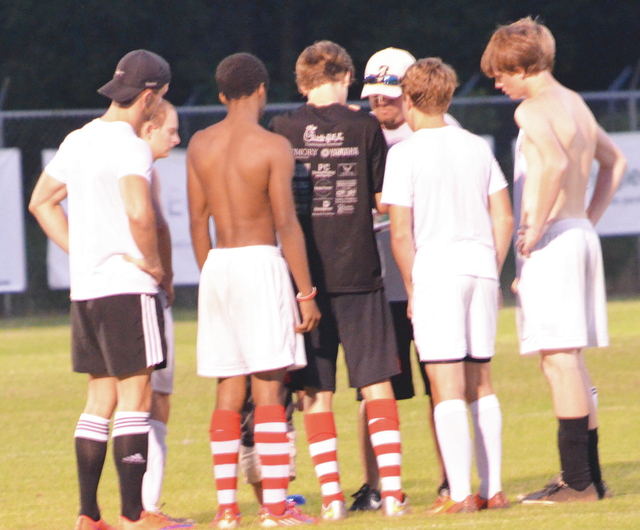 Players for LaGrange High and LaGrange Academy go for the ball during a seven-on-seven game on Monday at Callaway High. Kevin Eckleberry | Daily News The Troup Tigers are one of the five teams participating in this summer’s seven-on-seven league. Kevin Eckleberry | Daily News The Callaway Cavaliers huddle before the start of their game against LaGrange High. Kevin Eckleberry | Daily News

It was a great day for soccer, and there was plenty of it.

Teams representing five local schools hit the field at Callaway High on Monday for the start of a seven-on-seven soccer league.

Callaway, LaGrange and Troup, along with LaGrange Academy and Lafayette Christian School, are participating in the league that will go through July 25.

The league is the idea of LaGrange High coach Keita Placide, and all of the games will be played at Callaway High.

“We’re having a fun afternoon,” Placide said while watching his team play LaGrange Academy. “It’s nice for Callaway to let us come out here.”

Placide said the players are “getting some nice exercice, and building some friendships, and camaraderie. I think this is nice for the summer.”

Monday was a busy day.

The first game kicked off at 6:30 p.m., and the day’s final game between Callaway and Lafayette Christian began at 9:30 p.m.

Games will be played every Tuesday through July 21, and on July 25, the teams will compete in a knock-out tournament, with the championship game set for 1 p.m.

“It’s a great opportunity all-around,” Troup coach Jase Crenshaw said. “Everybody benefits from it. We’re all on board.”

Outside of Lafayette Christian School, each of the participating schools has at least two teams competing.

The idea is to let every player who is interested get a chance to play during the summer.

“This is a development stage for my (junior varsity),” Callaway coach Jake Hembree said. “It’s good to get them out and have them get a little experience touching the ball, and understand the movement of the game.”

The format for the summer league is quite a bit different from what the players are accustomed to.

Callaway’s field has been split in two, with two games going on at the same time.

It’s a shorter field, there are only seven players one each side including the goal keeper, and the games aren’t as long.

The teams play two 20-minute halves with a 10-minute halftime break, and that allows the teams to play multiple games in a day.

“You have more shots on goal. It’s a faster pace,” Crenshaw said. “They work on their individual skill work, and work with their teammates as well.”

When the league was created and the schedule set up, there were only four teams, but Lafayette Christian was a late entry to the party.

Lafayette Christian coach Shannon Powell is glad he was able to get enough players to field a team.

“It’s a good opportunity for them to get out and play, and touch the ball more than they would if we didn’t have it,” said Powell, whose team advanced to the state-championship game in the Independent Christian School Athletic Association last spring.

It’s a valuable experience for all of the teams, who will spend a lot more time together this summer than they would have otherwise.

For LaGrange, the league is especially helpful since the team is having to replace 12 seniors from last season’s team.

Last week, LaGrange participated in a camp in Oconee County, and that went well.

“We won two and lost one,” Placide said. “We’re coming off of that. The more soccer I can get with them, the better.”

Hembree said “it’s fun to get out and have them experience soccer as a community,” and he’s hoping as the summer goes along more and more people will come out to watch.

“It’s the first day, and we have a decent crowd,” Hembree said. “Once the word gets out about it, we should end up with a lot of people here.”