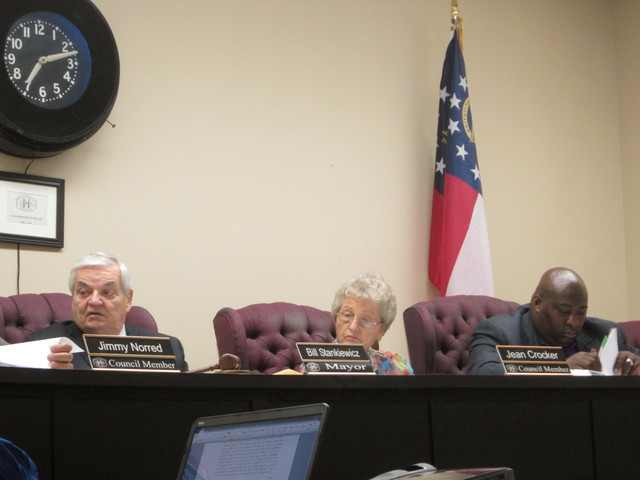 Member of the Hogansville City Council discuss the changes being made to the city’s hotel/motel tax. Council members voted to elect the LaGrange-Troup County Chamber of Commerce as the new recipient of the tax revenue generated from hotels.

Hogansville City Council voted to change the recipient of its hotel-motel tax revenue during a City Council meeting on Monday.

According to the state law regarding hotel-motel tax revenue, cities like Hogansville cannot use a downtown development authority, or DDA, as its designated marketing organization, or DMO, as the entity that receives tax revenue generated by the hotel-motel tax law.

“There won’t really be any changes in how the money is spent or used, we just had to change our DMO in order to comply with state law,” said Mayor Bill Stankiewicz. “The law is very complicated and it does not allow us to use our DDA for this purpose.”

City Council voted to begin using the LaGrange-Troup County Chamber of Commerce as its new DMO. In addition to the change in DMO, council members also voted on a new member to serve on the chamber’s tourism advisory committee.

Devereaux has served on the Leadership Troup board, the DDA promotions committee and is also a member of the chamber of commerce. She is the owner of a bookstore in Hogansville and is excited to be the first community member to serve on the committee, she said.

“I’m already a member of the chamber since I’m a business owner here in town,” said Devereaux. “I’m on the executive committee of the chamber. Since I’ve already been active with the chamber and the DDA, they chose to elect me to serve in this position.”

“This state law has been in place for years,” said Todd. “It has been continually amended to include certain things that particular cities across the state want to include in their community and it is very lengthy. We made sure to work on following the stipulations to the fullest extent.”

Devereaux’s term will last three years with the chamber, and the new DMO will become effective on July 1.