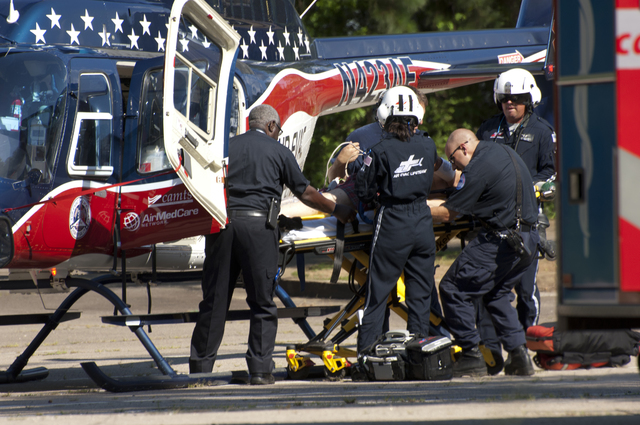 First responders load a 76-year-old man into a medical helicopter at Sunny Point Park on Mooty Bridge Road after his truck slipped out of gear an accidentally ran him over Wednesday afternoon.

A 76-year-old Troup County man airlifted to a Columbus hospital Wednesday after being run over by a truck.

His condition was unavailable at press time.

The man was outside his home in the 100 block of Poole Road when he was trying to load a calf into the back of his pick up truck, according to Sgt. Ken Little of the Troup County Sheriff’s Office. The vehicle slipped out of gear and rolled over part of his body, Little said.

He was conscious and alert when he called 911 for help around 4:30 p.m. Little described the man’s condition as “stable.”

The man’s abdomen was injured in the accident and first responders airlifted him because they were concerned he could have internal injuries, Little said.

An ambulance took the man from his home on Poole Road to a Sunny Point lake access park on Mooty Bridge Road where a medical helicopter landed to take the man to Columbus.

No further details were available at press time.