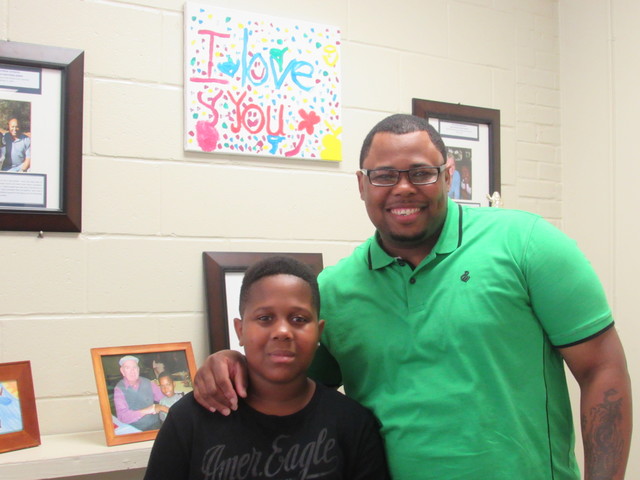 Antonio Williams, 12, stands with Derrick Goss. They have been a part of the Big Brothers Big Sisters program since November 2014. Both like to work with their hands and are building a canoe so they can fish out on West Point Lake. Hope Prescott, 16, with her ‘big sister’ Edna Foster, to whom she has been matched for five years. Prescott said Foster has helped her deal with some hard times in her life and attends most of her events, like chorus concerts and baton twirling competitions. Foster said the teen helped fill a void in her life after her husband passed away. T.J. Foster, 9, stands with his recently matched ‘big brother’ Ron Hall in May in the LaGrange chapter of the Big Brothers Big Sisters program. Hall lives a block away from T.J. and plans to take him fishing soon.

Hope Prescott and Edna Foster have been sisters for five years.

Though they don’t share the same last name, nor blood type, and are 56 years apart, these two are inseparable. They bonded through the local chapter of the Big Brothers Big Sisters program after meeting in July 2010.

“My mom and dad got divorced, and I didn’t feel normal,” explained Prescott. “I was depressed and lonely. But when we were together, we talked about it. She made me feel like I was somebody again … Edna helped me get through that.

“I see her as a supportive person, a good friend, someone to talk to … to share my life with.”

Foster said being Prescott’s “big sister” has been fulfilling for her as well.

“It’s been good for me,” she said. “I was lonely. My husband had died. She filled a void for me.”

The two get together often – traveling to Callaway Gardens, going swimming and, in the school months, Foster helps Prescott with her homework.

It is the same for Derrick Goss and Antonio Williams, 12.

“We do a lot of hands-on projects,” explained Goss. “I decided to build a boat so we can go out on West Point Lake. It is to show him that some things can’t be built in a day, but you can still see the fruits of your labor. We also do little projects like changing a car’s oil or tire.”

Goss and Williams have been matched since November 2014. The 12 year old said he’s already learned a lot from his “big brother.”

“He helps me mature and be a man,” said Williams. “He teaches me lessons … like don’t walk behind a person, always walk beside them.”

Kelley Mitchell, program manager of the LaGrange chapter of the Big Brothers Big Sisters program, said she hopes there will be more successful stories like this in the future. Right now, the program is in desperate need of more “bigs,” especially males.

The lack of mentors not only hurts the program, but the children. Mitchell said some kids have been on a list for two years waiting to receive their “big.”

“There’s no professional qualifications to be a ‘big,’ just someone who wants to make a difference in a child’s life,” said Mitchell. “We have a waiting list of children 6-14 years old, especially boys … who have been signed up by a parent or school counselor to seek someone who can be a trusted friend, positive role model and nurturer of possibilities.”

Mitchell said lack of time is one of the biggest reasons adults are hesitant about signing up for the program.

But Ron Hall and his wife said that isn’t an excuse. They have six children and Ron also works the night shift at Kia, but the two recently joined the Big Brothers Big Sisters program. Ron just met his little brother, T.J. Foster, 9, less than a month ago.

“I like to fish and he’s never been, so I told him we’re going to go fishing this summer,” Hall said.

“Bigs” meeting with their little brother and sister once a week can make a huge impact in their lives, Mitchell said.

Not only do the children experience new opportunities, but according to the Big Brothers Big Sisters website:

• 94 percent maintain or improve attitudes toward risky behaviors, and

• 84 percent maintain or improve their grades.

Mitchell said the experience also changes the lives of the “bigs” and friends and families around them.

“It’s a beautiful thing,” she said. “I follow up with all the matches – the families – everybody seems so happy. Everybody is laughing … my favorite day is match day.”

“It’s fulfilling. It makes you feel good,” said Goss. “I had every excuse not to … work … kids … but you’ll find time to make it work. We all have busy lives, but this is very fulfilling.”

Anyone interested in learning more about the LaGrange chapter of the Big Brothers Big Sisters program is asked to call Kelley Mitchell at 706-298-2434.