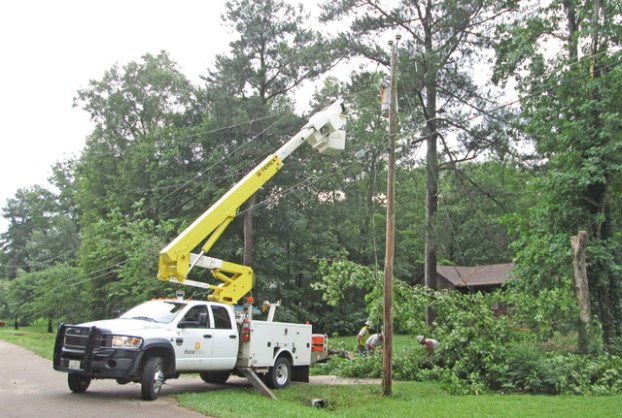 Emergency workers made contact with the National Weather Service, which confirmed seeing rotation on their radar systems over the area, according to Capt. Jeb Howington of the Troup County Fire Department.

“Their radars showed rotation, but it did not show any tornado activity,” he said. “This looks like it may have just been straight-line winds.”

Ken Hundley was one of the residents who called 911. He said that the storm began as a small thunderstorm, but that it quickly began producing hail and high winds. Hundley said that he went outside his home to check for funnel clouds just before the damage along the road occurred.

“When I opened the door, I got sucked out the front door,” said Hundley. “I could feel the suction and the motion of this thing, then I saw the lightening hit the transformer in front of my house. As soon as it took the tree down, it was gone.”

Residents experienced power outages along Paddlewheel Drive after a transformer was reportedly hit by lightening, which caused downed power lines. Crews worked to restore power following the storm late in the afternoon.

The calls were the only reports of damage in Troup County.

First responders load a 76-year-old man into a medical helicopter at Sunny Point Park on Mooty Bridge Road after his... read more