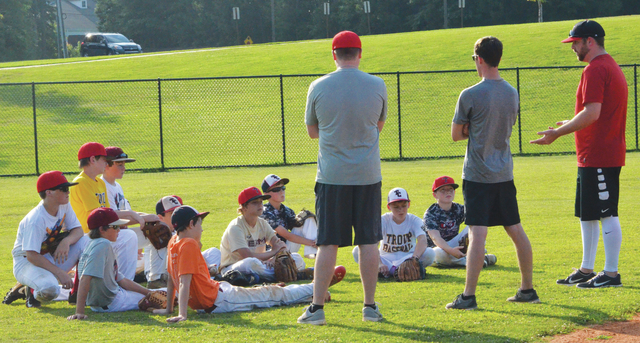 Troup National coach Andrew Caraway talks to his team before the start of practice on Tuesday. Kevin Eckleberry | Daily News

There are no guarantees in sports.

The best team doesn’t always win, and oftentimes what appears to be a sure thing is anything but.

So with that in mind, Troup National all-star coach Andrew Caraway can’t know how things are going to unfold when the Dixie Youth Baseball all-star tournament gets under way on Saturday in Hogansville.

What Caraway has no doubt of, though, is his team’s commitment to the game and the willingness of the players to do whatever it takes to be successful on the field.

“All these kids out here, they work hard,” Caraway said. “They do everything I ask. They’ve got good attitudes.

The 11-12-year-old district tournament will be held at the Hogansville Sportsplex.

There are only three teams in the tournament.

Joining Troup National in the field will be Hogansville and Manchester, and the tournament winner will qualify for the state tournament in July.

The action gets under way on Saturday at 10 a.m., and there will also be games at noon and 2 p.m. that day.

The final two teams in the double-elimination tournament will face off at 6 p.m. on Monday, and if needed, a final game would be played at 8 p.m.

Caraway wouldn’t be surprised to see his team play a strong Hogansville team in the championship game, and he said it would be a tough matchup.

“They’ve got some good pitching, some good hitting,” Caraway said of the Hogansville team, which is coached by Scott Thompson. “They’re going to be well-coached. There’s no doubt about that. Scott’s a great coach.”

Caraway believes his team can compete with anyone, though.

He said one of the strengths of the team is a pitching staff that features a trio of hurlers who didn’t give up much of anything during the recreation season.

“Their (earned run average) for the year was under 1.50 collectively,” Caraway said. “They probably gave up 20 total hits in 14 games. The pitching’s here. We’re trying to get the hitting. I feel like defensively, and pitching-wise we’re solid.”

Caraway, a former standout player at Callaway High, said practice the past few weeks has spent focusing on the fundamental aspects of the game, on working on the things that will be of crucial importance in tournament play.

Caraway’s assistant coaches include his brother, Matthew Caraway, as well as Drew Hagler and Brandon McCurry.

“Right now it’s spending a lot of time on fundamentals, just the little things that will get you beat,” Caraway said.

He said the keys to winning this time of year are to “don’t make a bad play worse, always know what to do before the ball is hit, play defense, and the hitting will come.”

When game time arrives on Saturday, Caraway said all he’ll be asking from his men is to “play hard, and take pride in what you do,” and to just see what happens.

WHO: Troup National, Hogansville and Manchester

OF NOTE: For a look at the Hogansville all-star team, see Friday’s sports section.