Troup National gears up for tourney 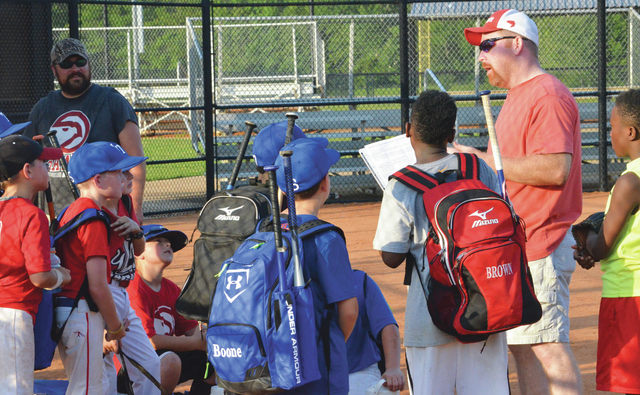 Troup American coach Chris Jones talks to his players at the close of practice on Tuesday. Troup American will play in the Dixie Youth Baseball district tournament on Saturday. Kevin Eckleberry | Daily News

After another day of practicing in the sweltering summer sun, the Troup American 9-10-year-old all-stars are that much closer to beginning what they hope will be a long tournament run.

Troup American, along with the Troup National all-star team, will play in the Dixie Youth Baseball district tournament.

The tournament gets under way on Saturday at 10 a.m. at the Harris Baseball Complex.

It’s a small, three-team tournament that includes the two Troup teams as well as Thomaston.

The district champion will qualify for the state tournament that will be held in Manchester, and the state winner moves on to the World Series.

Manchester will receive an automatic invitation to the state tournament, so it decided not to participate in the district tournament.

Chris Jones is the coach of the Troup American team, and he said the team has been a lot of fun to work with.

“It has. Absolutely,” Jones said at the close of practice on Tuesday at the Harris Baseball Complex. “And there are a lot of talented ballplayers out there.”

Troup National, Troup American and Thomaston will get together today to determine the draw for the tournament.

One of the teams will receive a first-round bye on Saturday, while the other teams will play at 10 a.m.

There will also be games at noon and 2 p.m. on Saturday.

The double-elimination tournament resumes at 6 p.m. on Monday, and if needed, a final game would be played at 8 p.m.

Troup National will have another practice session today before hosting a scrimmage game on Thursday.

“We’ve got a team coming from Roanoke, Ala. for Thursday,” Jones said. “That’ll be good to do that before Saturday.”

After another practice on Friday, it’ll be time to play ball.

OF NOTE: For a look at the Troup National all-star team, see Friday’s sports section.