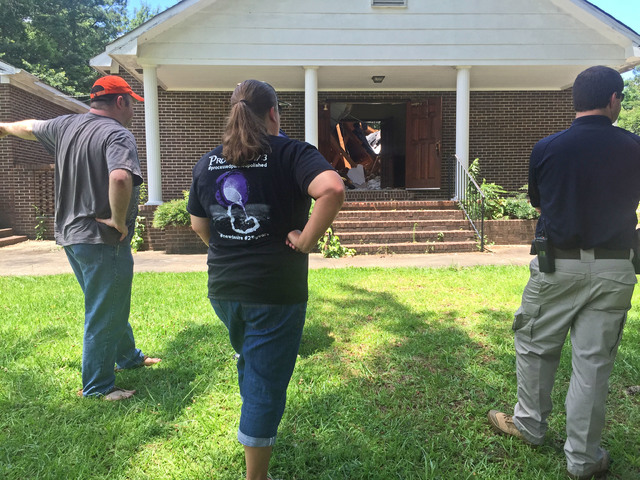 Larissa Wood and her husband, the Rev. Sam Wood, speak with Sgt. Stewart Smith, at right, a spokesman for the Troup County Sheriff’s Office, on Friday afternoon outside The Church on the Rock at 33 Givens Circle in West Point after the roof of the church collapsed mid-afternoon. No one was injured. The roof of The Church on the Rock at 33 Given Circle can be seen after it collapsed mid-afternoon Friday. No one was injured. Lt. Michael Williams of the Troup County Fire Department inspects a collapsed roof at The Church on the Rock, 33 Givens Circle, West Point, on Friday afternoon. No one was injured. The Church on the Rock at 33 Givens Circle near West Point sits with part of the roof caved in Friday. Troup County fire, sheriff’s and EMS personnel responded to the call about 1 p.m. and checked to see if anyone was inside. No injuries were reported. The door of The Church on the Rock at 33 Givens Circle shows the interior where part of the roof collapsed early Friday afternoon. The Church on the Rock pastor Sam Wood, left, with wife Larissa Wood and sheriff’s Sgt. Stewart Smith survey the damage at the church on Givens Circle after part of the roof collapsed Friday afternoon.

WEST POINT — The roof of a church just outside West Point collapsed about 1 p.m. Friday, but no one was injured in the incident.

All anyone could do was stare at the large, gaping hole where most of the roof used to be on top of The Church on the Rock sanctuary at 33 Givens Circle, just off West Point Road.

White dust, mostly insulation, danced around the wooden beams that came to rest where pews of people once sat for services decades ago. Fortunately, no one was inside when the building came down.

“I heard it when it happened,” said one bystander. “I thought it was a big tree or something.”

The Rev. Sam Wood, the church’s pastor, and his wife, Larissa, rushed to the scene to survey the damage. Wood said the building, one of the three on the property, was built back in the early 1980s.

He said the congregation of about 35 doesn’t use that sanctuary anymore. Wood told the Daily News he had discussed tearing down the old building just this past Wednesday.

“We (Wood and the assistant pastor) were looking at this frame over here,” he said. “It looked like someone had bench pressed it up. He said, ‘that thing will give way before long.’ We were going to bring it up Sunday about getting it tore down.”

Wood also said he knew the roof was unsafe, but he wasn’t sure why it had become weak. He said he never noticed any water spots.

According to Wood, he did have restoration crews come out and give estimates on the building, but he said it was going to cost more to get the facility fixed than to tear it down and rebuild.

Personnel from the Troup County Fire Department and sheriff’s office, along with medical personnel from American Medical Response responded to the call at 12:58 p.m., according to 911 officials.

Fire department personnel searched the scene and within about 20 minutes determined that there were no victims.

Lt. Michael Williams with the Troup County Fire Department said the firefighters had to pull out of the building because it became too unstable.

“We can’t search the middle … you can see where the outer walls are bowed out,” he explained.

Williams feared those walls would eventually collapse too. The entire building would have to be demolished, Williams said.

Emergency responders also called out power crews to cut the electricity to the building.

While the one building would have to come down, the main sanctuary of The Church on the Rock, where members meet every Sunday will still remain intact.

“We are going to pray about it and see where the Lord leads,” said Wood. “I’m just reminded of scripture that all things work together for good to those who love God and for those who are called according to his purpose.”