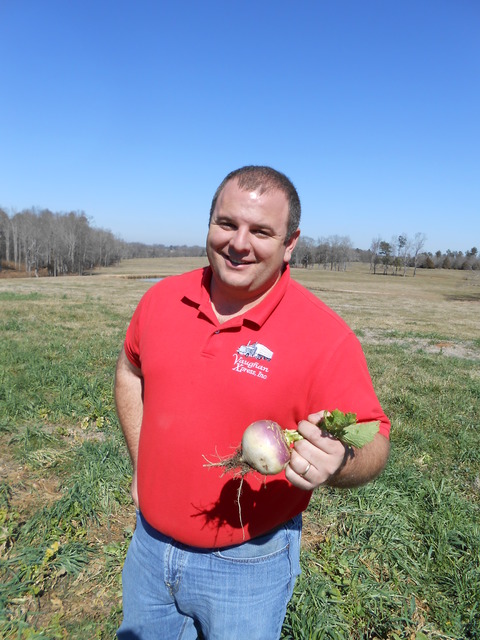 Area farmer Chase Vaughan proudly displays one of the grazing turnips from the test plot.

Improving grazing quality has been on the minds of many livestock producers over the years.

It is only recently that the idea has surfaced that you can improve both the grazing quality and the soil at the same time. Both go hand-in-hand.

The key to improving soil quality is improving the organic matter content of the soil. According to The Ohio State University, each 1 percent increase in soil organic matter increases the water holding capacity of a soil by 27,000 gallons, adds 1,000 pounds of nitrogen per acre, and 100 pounds each of phosphorus, potassium and sulfur.

Improving the grazing species speeds the development of organic matter. Micro-organisms feed on the organic acids, enzymes and other organic compounds that are produced by live roots.

Much of the topsoil in Troup County was depleted many years ago by cotton farming. Two farm families in Troup County, the Hoffmans and Vaughans, provided two test plots, 8 acres and 5 acres respectively, to test the theory of improving grazing quality and the soil.

Both plots were planted into living sod with a no-till grain drill in late September. One object of the test was to do the least amount of soil disturbance as possible.

Planting a potpourri of forages is the current trend in grazing. The Hoffman plot was planted with a mixture of alfalfa, medium red clover, hairy vetch, crimson clover, cereal rye, winter barley, turnips and radishes.

The vetch, rye and barley were planted at a rate of 6.25 pounds to the acre, the crimson clover at a little over three pounds, Hunter hybrid turnips at 1.5, the nitro radishes and red clover at one pound and the alfalfa at just under a pound.

Calibrating the drill was a little different with the disparity of seed sizes. The smallest seeds were placed in the legume box and the larger seeds in the grain box of the drill. The legumes were all inoculated prior to planting.

Neither field was irrigated. Very sparse rainfall was recorded at either plot until December rolled around. With the first heavy rain the seed began to germinate but it was too late for any of the turnips or radishes to germinate and provide fall grazing.

Both plots were ready to graze by the beginning of April. The height of the forages was approximately 17 inches. Every shovel full of earth exhibited earthworms. The roots of the legumes had nitrogen fixing nodules in abundance.

According to Philip Brown, a grazing specialist with the Natural Resource Conservation Service, estimated conservatively that the forage produced was at least 3.35 tons per acre. With a value $100 per ton that is $335 worth of forage.

He also estimated that the vetch put at least 50 to 75 pounds on nitrogen back into the soil. Brown says the best way of improving the soil is with root growth. Root growth will decrease compaction and improve the environment for soil microflora as well as earthworms.

Forest Hill of Two Rivers RC&D was impressed by how the hairy vetch sowed at what is considered a low rate, 6.25 pounds per acre and 10 pounds per acre was the dominant species in both plots. The rye and barley were visible but not a strong influence in the pasture mix.

One of the conclusions that may be drawn from the test plots is that mixtures containing more than three species sowed at low rates may be overshadowed by more aggressive forages such as hairy vetch and winter peas. Without adequate rainfall, the turnips and radishes did not make much of an appearance and did not provide any fall grazing opportunities. The forage produced by the vetch was outstanding and more than adequate to provide for the needs of lactating livestock.

Can soils be improved by improving the grazing quality of the forages was another question that can be answered in the affirmative. The nitrogen fixing bacteria was clearly visible in root samples and earthworms as well. Improving the organic matter content is a long term project that can be enhanced by adding improved forage varieties to the grazing mix.

July 13–17: Up Camp with 4-H. Come get two thumbs Up by growing Up, dressing Up and acting Up with Troup County 4-H. Lots of fun activities. Ninth through 12th graders; cost $45.

Market on Main begins Saturday mornings from 8 to 10 a.m. Come by and enjoy the pick of the day. Carmike Cinemas LaGrange 10 movie theater parking lot at East Depot and Main streets.